CUSTOMERS escaped death by inches after a runaway car ploughed into the front of a busy cafe while they were eating breakfast.

Ricky Garrett, 67, and his family had just moved to a warmer table when the red Kia Picanto smashed through the front window of the shop and into their former seats.

Tables were smashed to pieces, and son Aaron, 34, fractured his thumb while pulling his mum Susan, 66, out of the path of the out-of-control car yesterday.

Diners were pushed up against the walls by the force of the crash, but miraculously all seven customers and two staff members escaped without major injury.

A shocking video shows the battered car pressed up against the counter — still with cakes on top — and cups of coffee on nearby tables at the cafe in Newbridge, Caerphilly, south Wales.

Ricky, a singer, said it was a miracle nobody was killed in the crash which missed a mother with a pram by inches and an elderly man by seconds.Grandfather Ricky, from Six Bells, south Wales, said: ‘It was horrendous to be honest.

‘If we hadn’t have moved table we would have been dead.

‘I got pushed up against the wall.

‘It was pandemonium. It felt like it happened in slow motion.’

The crash happened when retired Susan and Ricky met Aaron, also a singer, and his partner Kayleigh Smith, 33, after the couple dropped off their son, 12, at school. 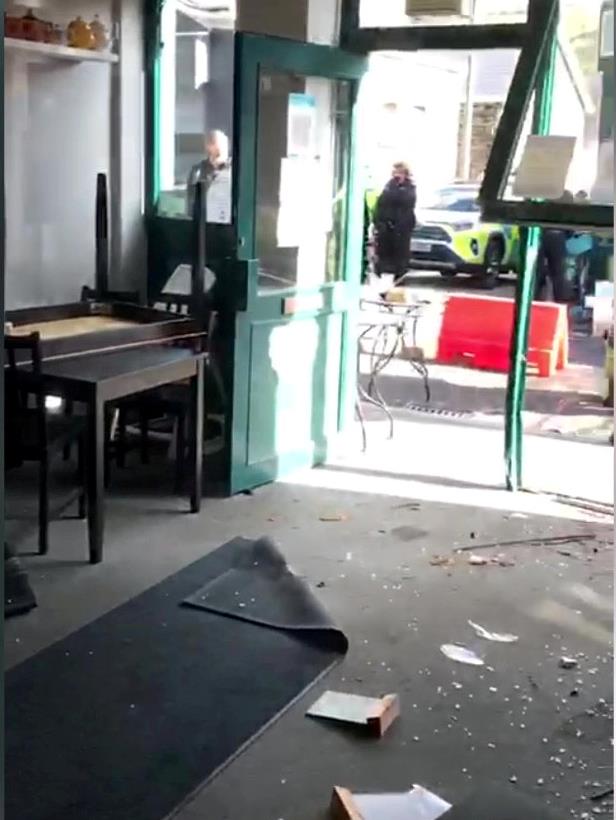 They were meeting for a late breakfast at Victoria’s Cafe and one half of the group had ordered at the counter, and the other half were in the process, at around 11.50am.

The family, who were joined by another friend, were at the table in the path of the car, but had moved moments earlier to be closer to seats near a radiator.

The vehicle smashed through the front window and Ricky injured his ribs when he was pushed up against the wall by the moving tables.

Aaron fractured his thumb, and is in a cast, while pulling his mum Susan from the path of the car, and she hurt her shoulder.

He said another woman was injured, and taken to hospital on a stretcher.

Ricky added: ‘To be honest with you, moments earlier an older gentleman was sat right in the window and left when he finished his breakfast. He wouldn’t be here now otherwise.

‘They have tables outside. Luckily people were sat in a place the car missed them. I think there was a lady with a pushchair or pram.

‘Everybody had a lucky escape. Someone was watching over everybody.’

Gwent Police were called to the scene and firefighters pulled the car from the shop.

Ricky said they heard the accident happened when an elderly driver, using an automatic vehicle, put his foot on the wrong pedal.

A police spokesperson said: ‘We received a call at 11.53am reporting a one-vehicle collision on Victoria Terrace in Newbridge.

‘The vehicle, a Kia Picanto, collided with a cafe.

‘Four people have sustained minor injuries and are being checked over by paramedics at the scene.

‘The vehicle is in the process of being recovered and further enquiries are being undertaken.’

A Welsh Ambulance Service spokesperson said: ‘We were called today, 15 October, at approximately 11:53am to reports of an incident involving a vehicle on Victoria Terrace, Newbridge.

‘One patient was transported to Royal Gwent Hospital.’