MOST budding chefs might splash out on new pots and pans, but Simon Baker has certainly gone one better — his newly created Scandi-industrial apartment in Peckham has been almost entirely designed around the kitchen.

Simon makes most amateur chefs seem like Pot Noodle-loving students and his vision for the property he owns with partner Roberta Schwarz was to make it somewhere they could cook and entertain with ease. Sweep through the open-plan living area and you can move effortlessly from grabbing a beer in the kitchen to grilling at the Drumbecue BBQ smoker.

Thanks to the work of London design agency Ensoul, the flat has gone from looking tired and poky to become an expansive space that’s perfect for entertaining, with bi-fold doors that connect to the roof terrace bar in summer. 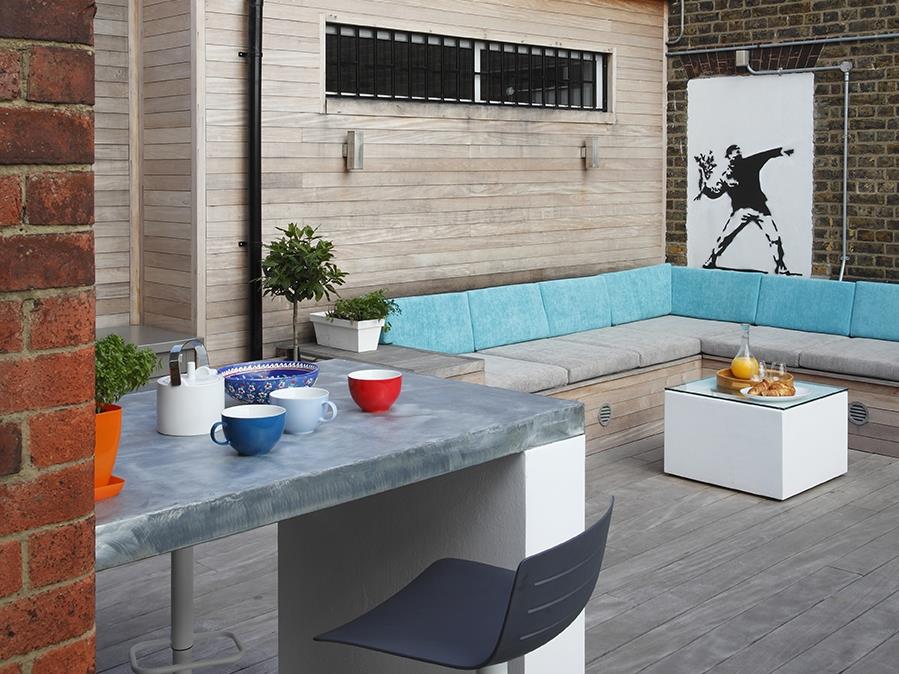 ‘It’s wonderful,’ says Simon, who has just been accepted to study for the Diplôme de Cuisine at Le Cordon Bleu culinary school. ‘I’m passionate about cooking and we love entertaining, so it was important to design the space carefully. Our friends are always interested to see what’s happening in the kitchen — now they can, without endangering themselves in the cooking area. As everyone knows, the party always happens in the kitchen!’

The couple had rented a house in a school conversion in Battersea for five years — converted schools, factories and warehouses are definitely their thing — after selling their house in Reading and moving to London. They had been searching all over the city for a property to buy for almost a year when they found the penthouse apartment in Peckham.

‘It was the only place we visited where we felt a connection — on first viewing we knew it was right for us.’

The fixtures and fittings were dated and drab, with basic bathrooms lacking personality and poor quality windows that didn’t block out the noise. But the one thing that struck them was the amazing city skyline visible from every room, framed by cool slit windows that are just 38cm high but a massive 160cm wide. ‘It’s like looking at a postcard,’ says Simon.

Making it liveable wasn’t easy. The rain came in during high winds, while some of the bricks were retaining moisture, causing damp. Extensive repairs were carried out in 2016 to fix the roof and after three years the main remodelling began. The pair moved out in April 2017, put all their furniture and possessions into storage and relocated to their studio in Vienna, Austria. They moved back four months later, after the most disruptive stages of work were complete.

Viki Lander, creative director at Ensoul, was given free rein to bring in colour and find ingenious storage and packaging solutions. The brief was to remodel the space, creating a large free-flowing, open-plan area for kitchen/dining/living, a master suite and smart storage, all while retaining the superb views.

A structural wall between the closed-off kitchen and living room was removed, leaving a pillar and the kitchen island built around it. The bespoke kitchen has a book-matched oak and anthracite lacquer with Corian worktops and steel-wrapped shelves, plus a dedicated bar area with glass shelves.

‘The kitchen has become a way of life to cook and socialise at the same time, so it was essential to remove that barrier,’ says Viki. ‘It’s where everyone hangs out, isn’t it?’

New lighting, plumbing and heating were installed. The master suite has an open-plan bathroom, with a WC hidden behind a dwarf wall, cleverly preserving both the skyline views and people’s modesty.

A further stroke of genius is found in the second bedroom. The couple wanted a room that would work as a second bedroom and a study, so it was designed with a walk-up bookcase leading to a new mezzanine with a sleeping area. There is also a sofabed on the lower area, so friends can stay.

Throughout the apartment there is a restrained style. The white walls and grey industrial surfaces are lifted by tactile materials and punchy colours. The solid wood dining table with steel legs was made in Italy and bought from Amode. The Jesse sideboard and wall unit which come from Go Modern, are also made in Italy and contrast with a lime green, wall-hung unit above. The Dokka pendant lights by Northern Lighting in Norway are in four different shades — arranged from blue to grey, with the blue lights nearer the lounge with the green sideboard, and the grey lights towards the kitchen’s anthracite cabinets.

Then there are the more subtle elements: the Nespresso capsules conveniently located under the kitchen shelf above the coffee maker; the glass note board mounted on the pillar by the breakfast bar; the massive, recessed bathroom cabinet hidden behind mirrored doors next to the shower; the foldaway hooks and retractable clothes-hanger racks in the bedrooms and the uber-organised, walk-in cupboard in the hallway. A housewarming gift, the ‘Mandela House’ street sign by the front door pays homage to Only Fools And Horses and their Peckham manor.

‘It’s a relaxed and confident space,’ says Viki. ‘It’s bold with use of colour and it has a strong feel, but at the same time is functional. The kitchen is tailored to every centimetre of space and function that Simon wanted. It looks great — I love that it has pops of colour. We could be passionate and creative and think outside the box, and do things that are quite different.’

Simon says the finished property has the industrial loft look with Scandinavian touches he had always dreamed of. ‘The layout is well thought through, spacious and practical. Form follows function, without losing the cosiness of home.’