A GREEN-FINGERED dad whose four-year-old son asked him to grow a sunflower ‘as tall as the house’ has ended up with a 20ft (6m) monster plant that almost dwarves his semi.

Douglas Smith, 42, is forced to use a ladder to tend to the lofty giant, which he first planted at the end of March and tended during lockdown.

But Douglas, dad of four-year-old son Stellan, didn’t expect that his gardening project would creep all the way up to the apex of his roof.

The huge sunflower now stands at 20ft, from the roots to the base of the petals — or just over 21ft if including the curve from where the flower has drooped downwards under its own weight.

The current record for the tallest sunflower in Britain is held by Richard Hope, of Wigan, who set the record in 2012 with a whopping 26ft 5in (8.04m) flower.

But product manager Douglas, from Stanstead Abbotts, Hertfordshire, says his sunflower is now worthy of the ‘honourable mentions’ list on the website Giant Gardening.

Douglas has to climb to the top rung of a ladder propped against his house, where he lives with wife Piper Terrett, 44, in order to just about reach the flower at the top of the stem.

He said: ‘I had high hopes that it would still be growing — but I am glad that it’s topped out a bit now.

‘I think it’s probably got maybe another inch or two left in it to grow, but it’s pretty much done.

‘I’ve had to rig the flower up on something that’s a little bit like a flagpole, attached to the top of the wooden stake, so that it doesn’t curve down too much under its own weight.

‘It’s flowering at the moment — there’s probably another week or so of flowering left, and then I’m hoping to leave it standing for as long as I can, to collect most of the seeds.’ 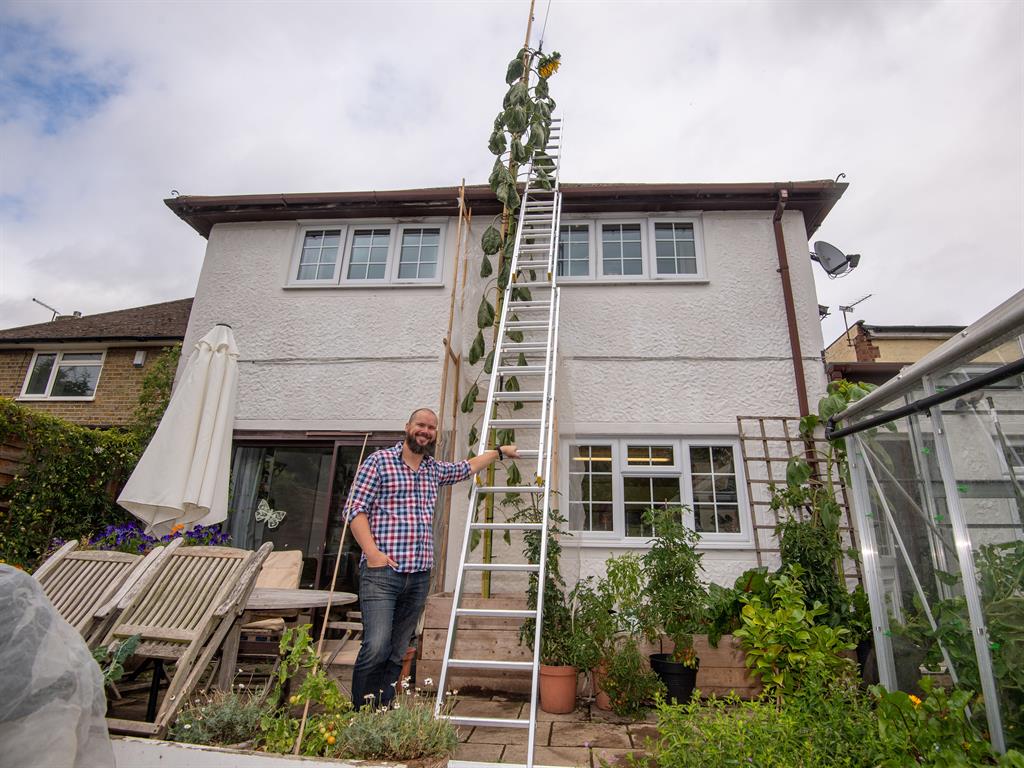 The sunflower started off with a fighting chance of growing this tall because Douglas was given the seed in a swap with John Butler, who holds the current record for tallest sunflower in North America at 26ft 8in (8.13m).

Douglas said: ‘A big part of it is to do with the genetics.

‘I’m not sure specifically what variety of sunflower this is, but it’s a bit like a thoroughbred horse — it came from a good start in life.

‘But the flower will also reward any TLC you are able to give it. I go out to feed and water it a couple of times a day.

‘I’m up the ladder at 7.30am most mornings — which certainly wakes me up.’

Douglas said Stellan is delighted with the sunflower’s progress.

He explained: ‘Earlier this year he said he wanted a sunflower as tall as the house. I don’t think people at his nursery believe him when he tells them he actually has one.’

Douglas is no stranger to growing large plants, having previously grown an enormous pumpkin, and a tomato that weighed almost three kilos.