A MAN is concerned that his house could be destroyed by the crumbling ruins of a castle that stands just a few feet away from his conservatory.

Rob Stockdale, 66, has lived in his village home for eight years, sharing his land with the medieval castle wall that stands between 30 and 40-feet tall.

But he says that over the last couple of years, stones have started to come down from the wall and now the bottom four or five feet of the wall is crumbling away.

And the father-of-three, who lives alone in his house in Llanmaes in the Vale of Glamorgan, Wales, said: ‘It could come down at any time.’

He added: ‘The ivy is digging into the walls which is helping to break it up. It’s only a few feet away from my conservatory.’

Mr Stockdale, who has three grandchildren, says he just wants the wall to be made safe, as he is trying to sell his home.

But he is having trouble getting any changes to the wall sanctioned — as Cadw, the Welsh government’s historic environment service, has deemed the ruin a site of national importance to Wales.

The wall, which belongs to historic Malefant Castle was given ‘scheduled monument’ status in May 2017, under the 1979 Ancient Monuments and Archaelogical Areas Act.

This means the site is recognised as a nationally important archaeological site and is given protection against unauthorised change.

But Mr Stockdale finds this ironic — because, to his knowledge, no-one ever visits the site.

He said the castle ruins belong to his neighbour, Mr David Thomas, who owns farmland on the other side of the crumbling wall — which Mr Stockdale says is only falling away on his side.

‘I raised the issue with him over a year ago,’ he added.

‘I said, “I’ve got grandchildren and people visiting my house. If anybody gets hurt by a stone coming down, who do you think I’m going to sue?”

‘He told me he would knock it down to eye level — but that hasn’t happened yet.’

Mr Thomas explained that he had looked into the costs involved in doing work on the wall, and they were quite high.

Mr Thomas added that it may be a case of dealing with a few strategic stones, but that guidance from Cadw was required as to what was permissible. 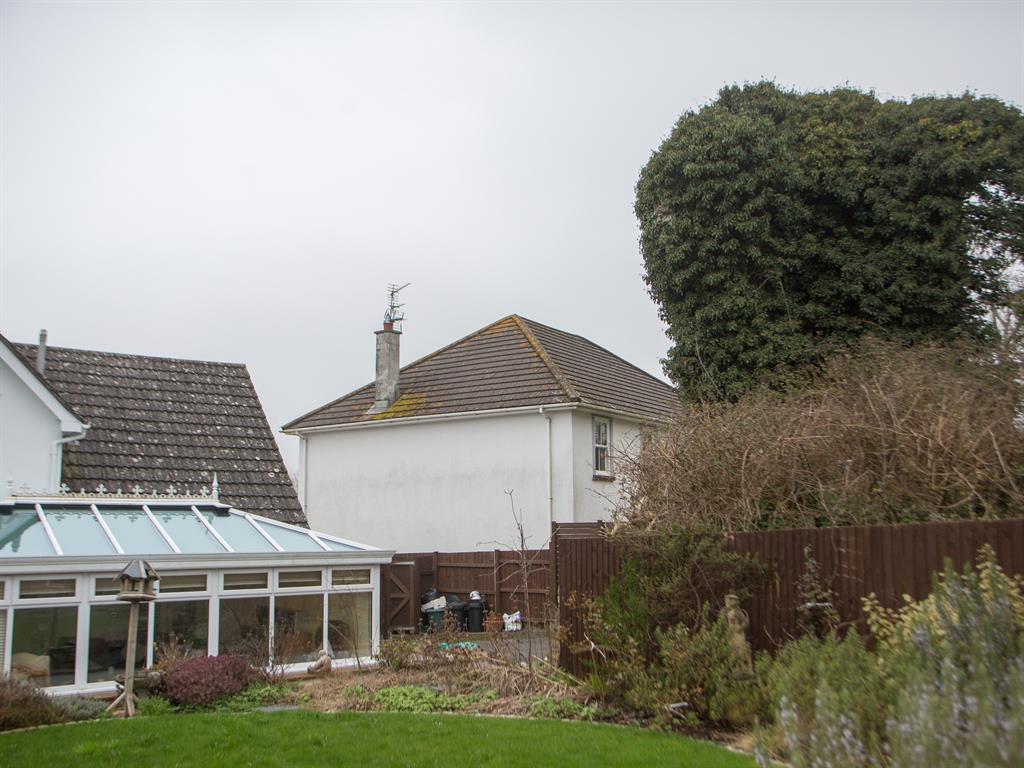 The Vale of Glamorgan Council has told Mr Stockdale that the work should be done.

In an email sent in January, the council conceded that the structure ‘is considered to be of national importance, with potential to enhance our knowledge of medieval domestic and defensive architecture.’

But the email continued: ‘My colleague will be contacting the landowner this week to reiterate the importance of ensuring the safety of the structure.’

The council said that, in line with the Building Act 1984, they reserve the right to carry out work on the wall, and later claim the money back from Mr Thomas.

A council spokesperson has since said: ‘Following a joint inspection of the structure it was “scheduled” by Cadw in May 2017.

‘As a result, consent and approval for any work can now only be given by Cadw.

‘The council understands the landowner is currently in discussions with Cadw and our planning team are happy to provide any advice that will help resolve this issue to the satisfaction of everyone involved.’

A Cadw spokesperson added: ‘The remains of the medieval manorial residence at Malefant Castle, Llanmaes were scheduled as a nationally important monument on May 17, 2017.

‘The condition of the structure is the responsibility of the owner.

‘Last year Cadw grant aided a structural survey commissioned by the owner which identified remedial works at a cost of £40,000.

‘We subsequently wrote to the owner inviting him to submit a grant application to help offset the cost of the remedial work but no application was received.

‘Such grants can usually cover up to 50 per cent of the cost of remedial works. Cadw is more than happy to continue to provide advice to the owner as necessary.’