THE weekly rate of new Covid-19 cases has soared in dozens of areas of England, following the addition of nearly 16,000 cases that went unreported because of a technical error with an Excel spreadsheet.

The problem has led to a delay in efforts by NHS Test and Trace to find the contacts of those who tested positive for the virus, in some cases by around a week.

Prime minister Boris Johnson was unable to say this morning how many contacts of positive coronavirus cases had been missed.

Downing Street said an investigation is under way to establish why the issue had not been identified sooner.

It came as scientists raised concerns that potentially thousands of people who are contacts of those with Covid-19 may have spread the virus in the last week. 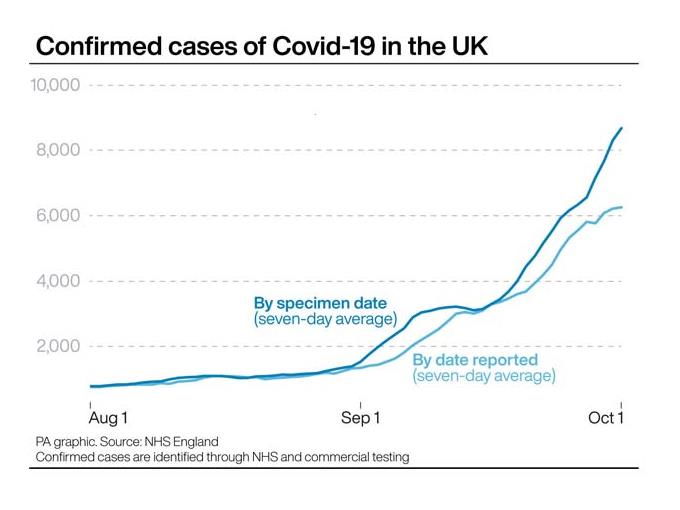 The issue occurred when people who tested positive were not recorded once an Excel spreadsheet reached its maximum size, a spokesman for PHE said this morning.

PHE said earlier that the technical issue resulted in 15,841 cases between September 25 and October 2 being left out of the reported daily coronavirus cases.

It said the outstanding cases were transferred to NHS Test and Trace ‘immediately’ after the issue was noted and all cases were passed on to tracers by 1am on Saturday.

Dr Duncan Robertson, lecturer in management sciences and analytics at Loughborough University and fellow of St Catherine’s College, Oxford, said the error was ‘an absolute scandal’.

He tweeted: ‘These individuals will not have had their contacts identified and those contacts may have become infectious and may have been spreading the virus.’

Paul Hunter, professor of health protection at the University of East Anglia, said ‘there will be occasional glitches’ in a system this size, but added: ‘I think the thing that surprised me was the size of it — almost 16,000 results going missing over the course of a week is quite alarming, I think.’

Prof Hunter told BBC Radio 4’s Today programme: ‘If you’re going to do your contact tracing, there is a very short timeframe in which you can do it effectively.

‘And the reason is that we know now that this infection is most infectious at around the time people develop symptoms — so very early on in the illness — and if you’re going to therefore identify contacts … it really needs to be done within a matter of a day or so if you’re going to actually have any effect.’

Rowland Kao, professor of veterinary epidemiology and data science at the University of Edinburgh, said the contacts of those affected will ‘have already contributed extra infections which we shall see over the coming week or so’.

The Excel spreadsheet reached its maximum file size, which stopped new names being added in an automated process, it was reported.

The files have now been split into smaller multiple files to prevent the issue happening again.

PHE said every single person who was tested initially had received their test result as normal, with all those testing positive told to self-isolate.

The number of call attempts to contacts of those affected is being increased from 10 to 15 over 96 hours.

Asked how many contacts of positive coronavirus cases had been missed as a result of the error, Mr Johnson told reporters in central London: ‘I can’t give you those figures. What I can say is all those people are obviously being contacted and the key thing is that everybody, whether in this group or generally, should self-isolate.’

He said the updated figures meant that the prevalence of the virus was where experts had expected it to be and it would soon be apparent if extra restrictions were having the intended impact.

‘The incidence that we are seeing in the cases corresponds to pretty much where we thought we were,’ he said.

‘And, to be frank, I think that the slightly lower numbers that we’d seen, you know, didn’t really reflect where we thought the disease was likely to go, so I think these numbers are realistic.’

Downing Street said the failure was the result of issues relating to the transfer of data between organisations.

The prime minister’s official spokesman said: ‘The issue relates to the transfer of data between NHS Test and Trace and PHE.’

Asked if Mr Johnson still has confidence in the head of NHS Test and Trace, Baroness Harding, the spokesman said: ‘He does, yes.’

Shadow health secretary Jonathan Ashworth said the error was ‘shambolic’, adding that ‘people across the country will be understandably alarmed’.

Health secretary Matt Hancock is to make a Commons statement on the issue this afternoon.