DOWNING Street has said the contents of some free school meal food parcels sent to families are ‘completely unacceptable’ and that the government is urgently looking into the issue.

It came as the government faced calls to urgently roll out its national free school meal voucher scheme after images shared on social media showed poor quality and low value packages sent to families during the lockdown.

Manchester United footballer Marcus Rashford — who has been behind a drive to get free school meals to those children who need them — has called for the system to be fixed ‘quickly’.

Dad-of-one Simon Young, 50, from Cheltenham, blasted the appalling ‘£30’ free school meals pack given to feed his daughter for a week — worth an estimated £4 and containing little more than bread and crisps.

He said the so-called hamper was barely enough to feed his 11-year-old, Lola, for three days.

It contained a loaf of bread, three slices of cheese, two slices of ham, two packets of crisps, an apple, a pear, and two slices of tray-baked cakes.

Mr Young said: ‘It’s ridiculous, there isn’t even enough sandwich fillings for five sandwiches — and what am I supposed to do, cut the apple in half to make it last two meals?

‘Lola is a growing girl, one of the tallest in her class, and there’s no way this would last her a week, even if we stretch it out as far as possible.’

Lola qualifies for free school meals and earlier in the lockdown unemployed Mr Young got £30 vouchers he could spend at the supermarket.

But last week he ‘thought it was a joke’ when he picked up the food parcel from school, which has now replaced the voucher scheme.

Single dad Mr Young said: ‘To see what food we were given, my first reaction was to laugh at how tiny the portions were.

‘I remember thinking, “This is an absolute joke”.

‘I have an 11-year-old daughter and, for her, that food will last three days maximum, so then what am I supposed to do?

‘This is not enough to feed a growing child.’

Other disgruntled parents also shared pictures online of their ‘£30’ ‘hampers’ to show the paltry amount of food contained in them and one told how she was forced to throw away the meagre package she got because it contained open fresh food products that weren’t refrigerated.

The 34-year-old single mum from Plymouth picked up the parcel last week for her six-year-old son who qualifies for free school meals. 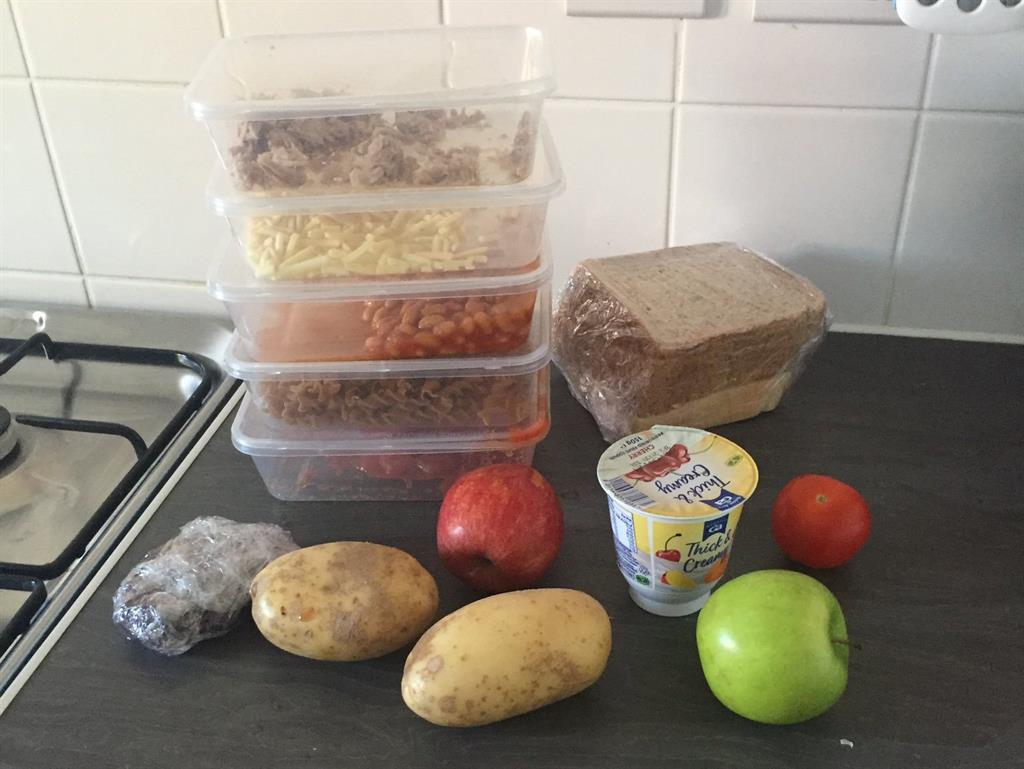 Intended to feed a child for a week, it (above) consisted of plastic boxes — some broken — filled with approximately two tablespoons of beans, and the same quantity of cheese, chopped tomatoes and tuna.

There was also a tub of dry pasta, two potatoes, two apples, a single tomato and a yoghurt.

During the previous lockdown, the mum was given £15 vouchers which, thanks to savvy shopping, she was easily able to turn into nutritious hot lunches.

But last week she got an email to tell her the vouchers had been replaced with a pick-up ‘hamper’ service.

The mum, who worked for ten years before recent ill health, said: ‘They gave me it in a plastic carrier bag and some of the lids were broken or cracked.

‘I was really shocked, if I’m honest with you.

‘That’s supposed to be for a week.

‘I didn’t know how long it had been out the fridge and it was fresh food, so I had to chuck it out, as bad as that is. Especially at the moment, you have to be so careful about health.

‘I used to be able to get a lot with £15 vouchers. It goes a long way in somewhere like Aldi. It helped massively. I can get a lot with that — I can make it stretch really far.

‘But what they gave me can’t have cost more than a couple of pounds.

‘It’s embarrassing. When they gave you that, it made me feel embarrassed for myself.’ 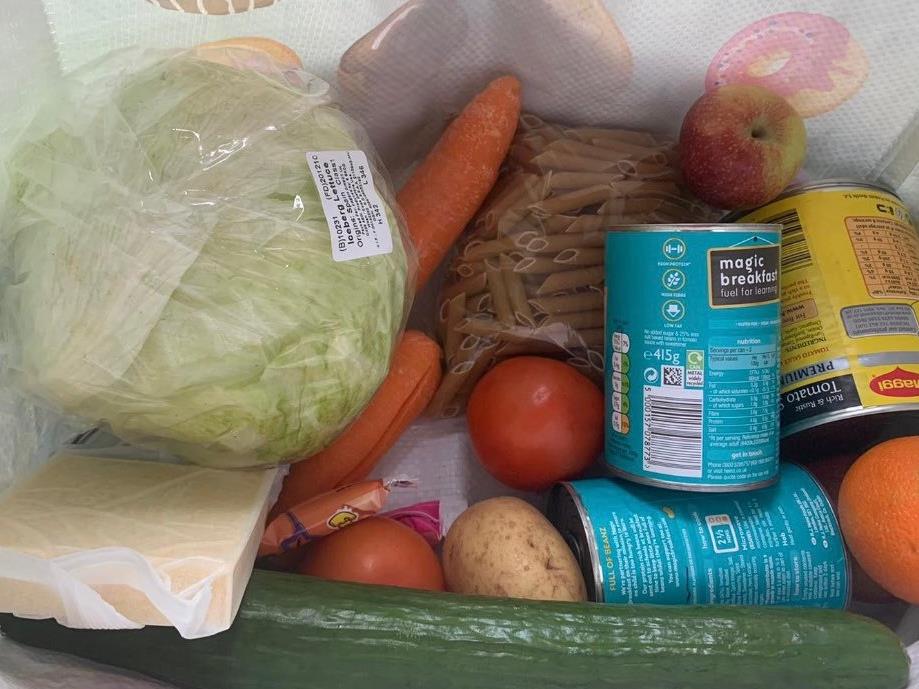 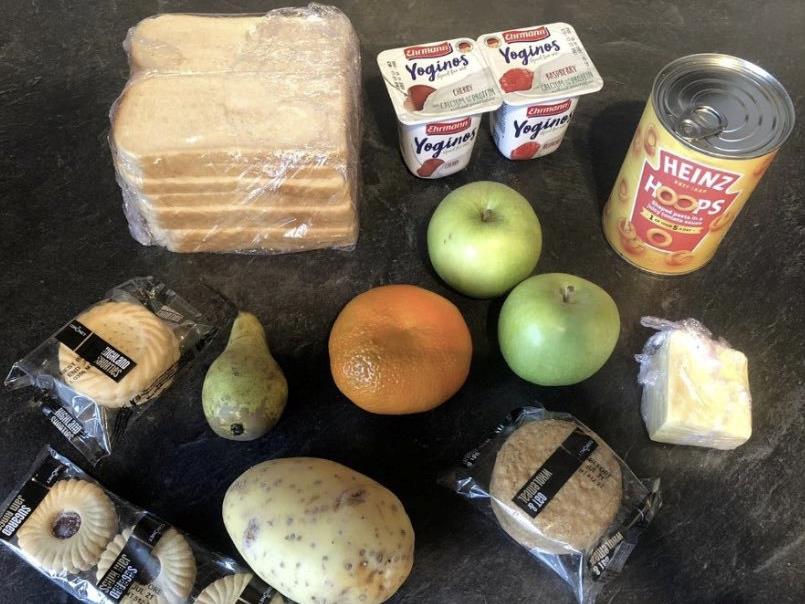 The prime minister’s official spokesman told a Westminster briefing: ‘We’re aware of those images circulating on social media, and it is clear that the contents of those food parcels are completely unacceptable.

‘The Department for Education is looking into this urgently and the minister for children, Vicky Ford, is speaking to the company responsible and they will be making it clear that boxes like this should not be given to families.’

MPs, paediatrics and sector leaders have called for a review of food packages being sent out to families after one mother posted an image of a £30 parcel estimated to contain just over £5 worth of food.

Department for Education (DfE) guidance says schools should work with their school catering team or food provider to provide food parcels to eligible free school meal children at home during the lockdown.

The guidance, updated on Friday, adds that schools can also provide meals by providing vouchers for a local shop or supermarket, or by using the DfE’s national voucher scheme, ‘which will reopen shortly’.

A head teachers’ union said schools have been left having to ‘piece together’ food provision for pupils in the absence of a national supermarket voucher scheme for children eligible for free school meals.

Meanwhile, the children’s commissioner for England Anne Longfield said she is concerned that preference appears to be being given to parcels ‘rather than vouchers which would let families make choices about their food’.

Ms Longfield added that her department was following up concerns with the DfE about ‘the standard, adequacy and nutritional value of food boxes’.

Doctors at the Royal College of Paediatrics and Child Health (RCPCH) have written to education secretary Gavin Williamson calling for a review of food packages delivered to pupils eligible for free school meals. 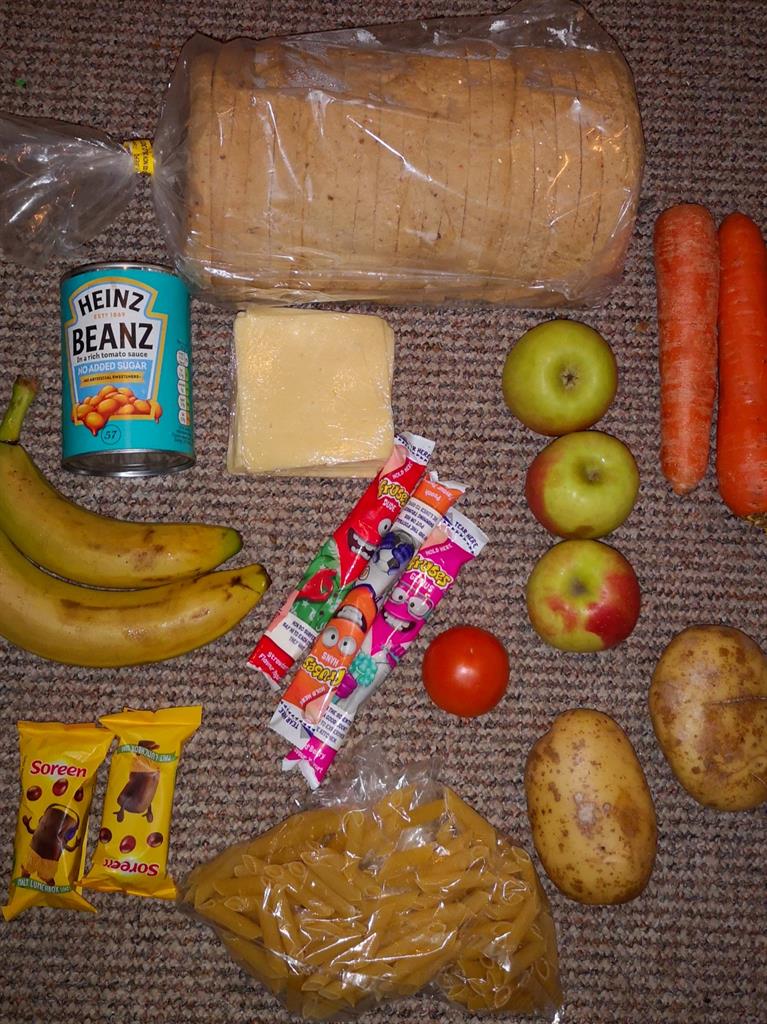 Chartwells, the education food service company which she said provided the parcel, has said it is ‘keen to investigate’ the food parcel with the relevant school to address any potential operational issues. 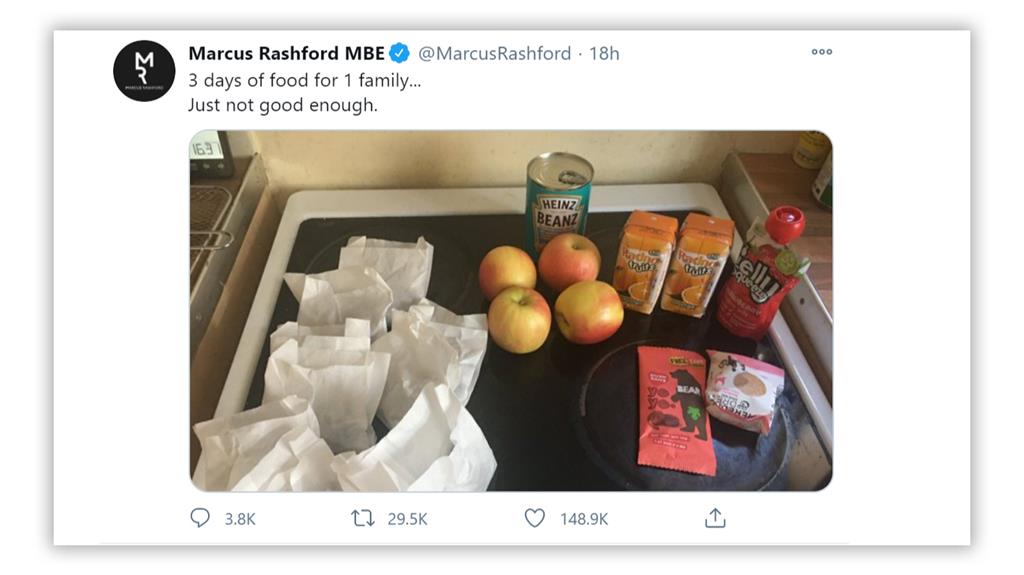 Rashford tweeted another picture (above) and wrote: ‘3 days of food for 1 family… Just not good enough. Then imagine we expect the children to engage in learning from home.

‘Not to mention the parents who, at times, have to teach them who probably haven’t eaten at all so their children can… We MUST do better.’

The footballer, who said he had reached out to Chartwells, tweeted that the company had clarified that they were not the exclusive supplier of free school meals across the UK.

He said he looked forward to hearing the outcome of a meeting between the DfE and Chartwells, adding: ‘Something is going wrong and we need to fix it, quickly!’

‘As a paediatrician, I can say the contents are not nutritionally sufficient for children and young people. Children who rely on free school meals have worse health outcomes than their peers and deserve proper help. The examples shared are an insult to the dignity of people who rely on this support.’

He added: ‘We call on government to urgently review its supplier list and to provide the resource needed for local authorities to offer flexibility for families in how they want to receive this vital support.

‘Some local authorities give vouchers or cash payments. Not every family is the same, but every family deserves to be treated with respect.’

Geoff Barton, general secretary of the Association of School and College Leaders (ASCL), said: ‘The government needs to get a move on with reopening the national free school meal voucher scheme.

‘Schools have been left having to piece together provision by arranging for food parcels and local vouchers. As we have seen from these images online of inadequate food parcels, this can go wrong, and we need the availability of a universal system.’

Chartwells said it is fully investigating the images of food parcels circulating on social media, but the company believes many of them are not its hampers.

A spokesperson for Chartwells said: ‘We take our responsibility to provide children with access to nutritious food very seriously.

‘We have worked hard to produce food hampers at incredibly short notice during these challenging times.

‘Our hampers follow the DfE specifications and contain a variety of ingredients to support families in providing meals throughout the week. In the majority of instances, we have received positive feedback.’

On the food parcel shared by Twitter user Roadside Mum, the spokesperson acknowledged the image ‘falls short of our hamper specification and we are keen to investigate with the relevant school so we can address any operational issues that may have arisen’.

Local authorities and schools decide which free school meals provider to use and contracts are not awarded centrally from the government, the DfE said.