A LORRY driver accused of the manslaughter of 39 migrants was part of a ‘global ring’ involved in smuggling large numbers of people into the UK, a court has heard.

Maurice Robinson, 25, was arrested after the bodies of eight women and 31 men were found in the refrigerated trailer attached to his Scania cab in an industrial park in Grays, Essex, in the early hours of October 23.

Robinson, who is known as Mo, appeared at Chelmsford magistrates’ court today via video link.

His hearing coincided with prime minister Boris Johnson’s visit to Thurrock council offices in Essex to sign a book of condolence to the victims.

The gruesome discovery last week has sparked a huge international investigation to try to identify the victims.

Essex Police initially believed the 39 were all Chinese nationals, but Vietnamese men and women are now feared to be among the dead and other nationalities may be involved.

All the bodies have now been moved from the truck in Tilbury Docks to Broomfield Hospital in Chelmsford, for post-mortem examinations to be carried out.

It is understood that very few had identification documents, forcing investigations to rely on features such as fingerprints, scars and tattoos to try to trace their families.

Robinson is charged with 39 counts of manslaughter of persons unknown, conspiracy to traffic people between December 1, 2018, and October 24, 2019, and conspiracy to assist unlawful immigration between the same dates.

The human trafficking charge and the unlawful immigration charge both relate to the 39 bodies found in the lorry.

At Robinson’s brief court appearance, prosecutor Ogheneruona Iguyovwe described the conspiracy charges as ‘a global ring’ involving ‘the movement of a large number of illegal immigrants into the UK’.

The defendant was dressed in a grey prison tracksuit and spoke only to give his name, his address as Laurel Drive in Craigavon, Northern Ireland, and his nationality as British.

Robinson was not asked to indicate a plea and will next appear at the Old Bailey on November 25 for a plea and trial preparation hearing. 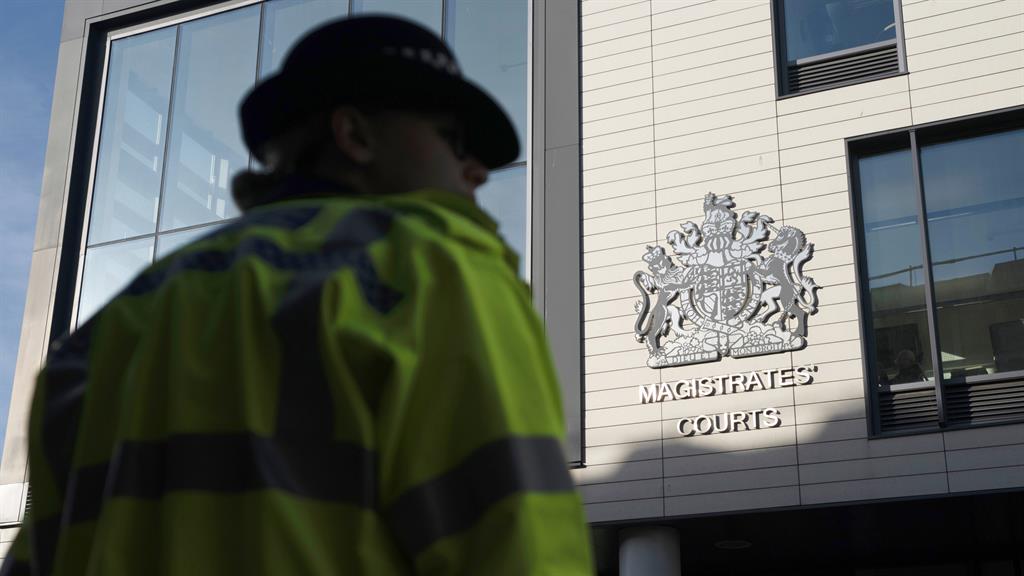 District Judge Timothy King remanded Robinson into custody, saying: ‘You have heard the nature of the allegations you face and the majority of these can only be dealt with in the crown court.

‘I therefore allocate all matters to the Central Criminal Court on November 25 and you will be required to enter your pleas on that occasion.’

Robinson’s solicitor Julian Hayes made no application for bail.

The BBC said it had been in contact with six Vietnamese families who feared their relatives were among the dead, with some having the smuggling fees repaid.

Vietnamese ambassador to the UK, Tran Ngoc An, spoke to home secretary Priti Patel on Friday night before meeting investigators from the National Crime Agency and Essex Police. He later visited the civic centre in Grays to pay tribute to the victims.

Another man wanted in connection with the investigation was arrested at Dublin port on Saturday.

Gardai said the man, in his early 20s and from Northern Ireland, was held over an unrelated outstanding court order.

He is understood to be sought by Essex Police as part of its probe, and the force confirmed officers were in touch with Irish police.

Three other suspects have been released on bail.

A man and woman, both 38, from Warrington, were arrested in Cheshire on Friday and a 46-year-old man from Northern Ireland was arrested at Stansted Airport later the same day.

All three had been questioned on suspicion of manslaughter and conspiracy to traffic people.

It is not yet known when the victims entered the trailer, where temperatures can be as low as minus 25C if the fridge is activated, or the exact route it travelled.

Belgian officials said the trailer arrived at Zeebrugge at 2.49pm on Tuesday and left the port the same day en route to Purfleet.

The trailer arrived at Purfleet at around 12.30am on Wednesday, and was picked up by the cab, known as the tractor, which arrived from Northern Ireland via Holyhead in north Wales on Sunday.

The lorry left the port at Purfleet shortly after 1.05am before police were called to the Waterglade Industrial Park on Eastern Avenue in Grays at 1.40am.