UNLESS you’ve been living under an enormous rock or are a conspiracy theorist (in which case past form says you might get a punch in the face from Buzz Aldrin), you’ll know tomorrow marks the 50th anniversary of the Moon landing that made heroes out of the Apollo 11 crew — Neil Armstrong, Aldrin and Michael Collins’ mission was the first of six that saw astronauts leave footprints on the lunar surface.

Although truly revolutionary for its time, some of the technology that landed humans on the Moon was mind-bogglingly primitive by today’s standards. Even the smartphone in your pocket/handbag/manbag has thousands of times the processing power of the computer that guided the astronauts there.

In the 47 years since humans last set foot on lunar soil, tech has moved on — and in just a few years’ time, it could help us go back.

The race to return

Nasa recently announced plans to return to our rocky neighbour by 2024. In one giant leap for womankind, one of the two astronauts to set foot on the Moon will be female, and the mission is named Artemis after Apollo’s twin sister, the Greek goddess of the hunt, wilderness and Moon.

The lucky pair will travel in the next-gen spacecraft Orion, which looks similar to the cone-shaped Apollo capsule but has room for up to four astronauts instead of three. Orion is already being tested and is due for its first uncrewed lunar flight next year. The only snag is that the rocket it’s due to launch on isn’t ready yet.

Nasa’s massively over-budget Space Launch System (SLS), partially built from leftover parts from the mothballed space shuttle missions, is way behind schedule. And that’s where private space firms might be able to help out.

SpaceX’s reusable rockets are already used to deliver supplies to the International Space Station (ISS), including everything from the ISSpresso, a space-friendly coffee machine, to an AI-powered spherical robot called CIMON, and the firm’s Falcon Heavy rocket could be used to ferry Orion to the Moon .

SpaceX founder Elon Musk and his team are also working on an even bigger rocket called the Super Heavy, along with a fancy passenger-carrying spacecraft dubbed Starship, which could be used for future trips to the Moon and even Mars.

Not to be outdone, Amazon chief Jeff Bezos’s Blue Origin is also developing a reusable rocket. Named after John Glenn, the first American to orbit the Earth, the New Glenn rocket is set to make its debut in 2021.

What’s more, Bezos recently unveiled a cool concept model for the Blue Moon robotic lunar lander, which could fly important supplies up to the Moon ahead of the crewed mission. So far, Nasa doesn’t have a Moon lander for the 2024 mission, or the promised Gateway — a mini space station set to orbit the Moon and act as a jumping-off point for the astronauts — so private space firms might be the only hope.

While America’s tech billionaires peacock over who’s got the biggest rocket, Britain’s own space geek with billions in the bank, Richard Branson, has plans to take rich tourists into space. Just last week his Virgin Galactic became the first publicly traded human spaceflight firm. Suborbital flights are expected to blast off as early as this year but if you fancy a trip, you’ll need to lay off the avocados for a while as seats cost $250,000 (around £200,000).

After sending astronauts back to the Moon in 2024, building a permanent base on the lunar surface by 2028 is the next step in the plan before venturing to Mars in the 2030s. ‘We’re thinking of going back to the Moon but not really for the Moon’s sake any more,’ said the first British astronaut, Helen Sharman, this week at an event held by Poly, makers of the Apollo 11 communication headsets. ‘The reason to go back to the Moon will be to go on to Mars, which is the next really exciting destination.’

The idea is that revisiting the Moon will act as a practice run for crewed missions to the Red Planet.

‘Returning to the Moon will help scientists unravel the secrets of the solar system and bring new technology through the challenges of learning how to live and work outside the relative safety of Low Earth Orbit [where the International Space Station is],’ says Libby Jackson, human exploration programme manager at the UK Space Agency.

‘The Moon is the ideal location for the next step in the expansion of human space activity, from the ISS to Mars. We could test habitats and safety systems while studying the effects of space radiation and microgravity on human health, remaining close enough to Earth to manage the risks.’

The number of benefits that exploration of the cosmos has given us back on Earth is astronomical. The Apollo missions alone gave us the Moon rocks that have transformed our understanding of our planet, and those samples are still being studied today. Portable computers, freeze-dried food and fireproof clothing for firefighters are just a few of the engineering breakthroughs from the Apollo missions.

Returning to the Moon is undoubtedly a worthwhile trip but if the 2024 deadline seems optimistic, that’s because it is — massively so. Despite being staffed by people with brains the size of planets, Nasa doesn’t have anywhere near the budget it had during the stellar days of the Space Race. Not even close. But Jackson is hopeful, saying: ‘It’s a challenging time frame but achievable.’

With America going for another moonshot, where do we fit into this galactic future? The UK is a member of the European Space Agency (ESA), which recruited British astronaut Tim Peake, and the ESA is helping Nasa to build its Orion spacecraft and the Lunar Gateway. But will we ever see a Brit on the Moon?

‘Hopefully one day,’ says Jackson. ‘ESA astronauts will likely fly on some of the missions so some time in the future there may be a British astronaut assigned to one.’ 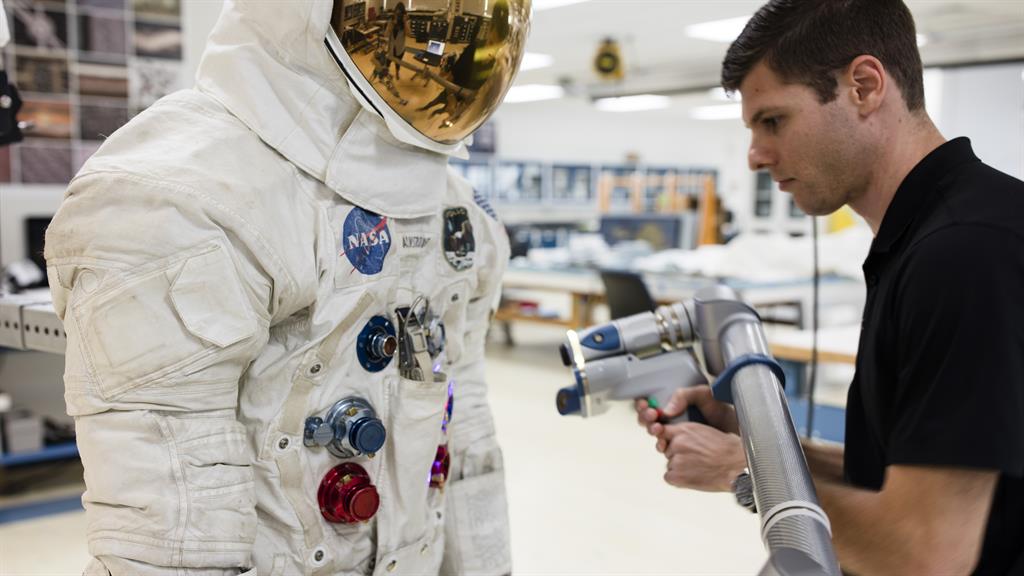 They may have kept Apollo mission moonwalkers alive on the lunar surface but spacesuits are surprisingly fragile. That’s why the Smithsonian National Air and Space Museum in Washington took Neil Armstrong’s spacesuit off display in 2006. It turned to Kickstarter with its Reboot The Suit crowdfunding campaign raising $700,000. The preservation team took X-rays and scans of the suit to map its structure, the idea being to stop its materials degrading any further. The Smithsonian also set out to create a digital 3D version that will last long into the future — hundreds of photos and various scanning techniques helped capture every detail to form a virtual spacesuit that can be explored online. Armstrong’s historic garment finally went back on display at the museum this week. airandspace.si.edu 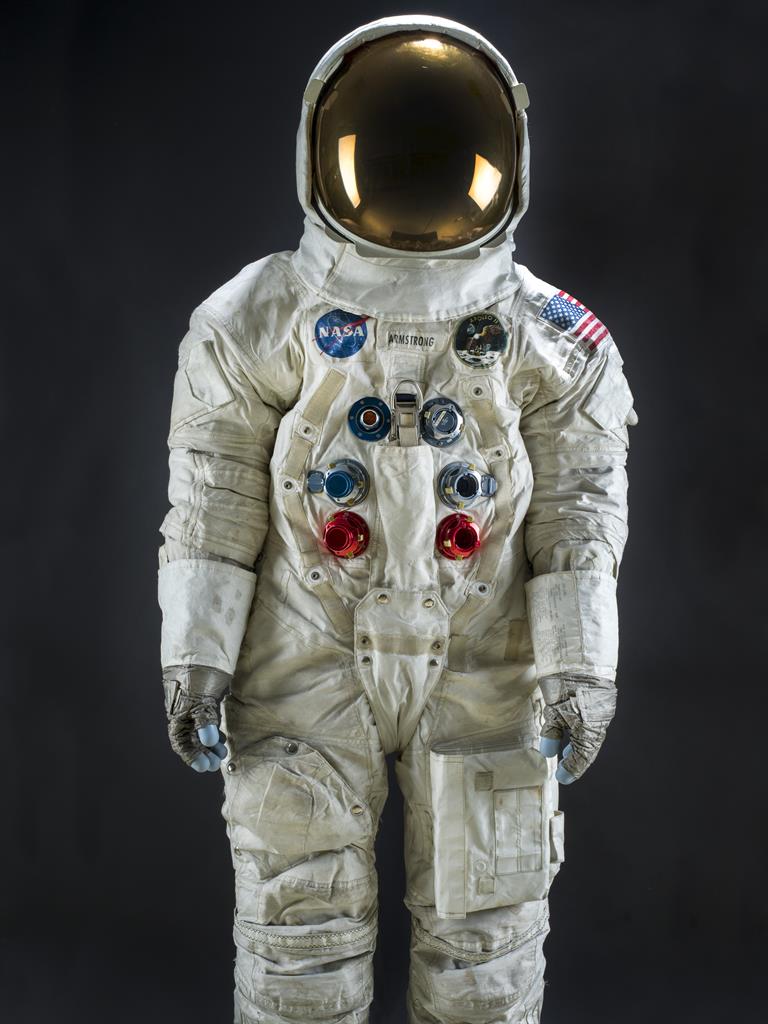 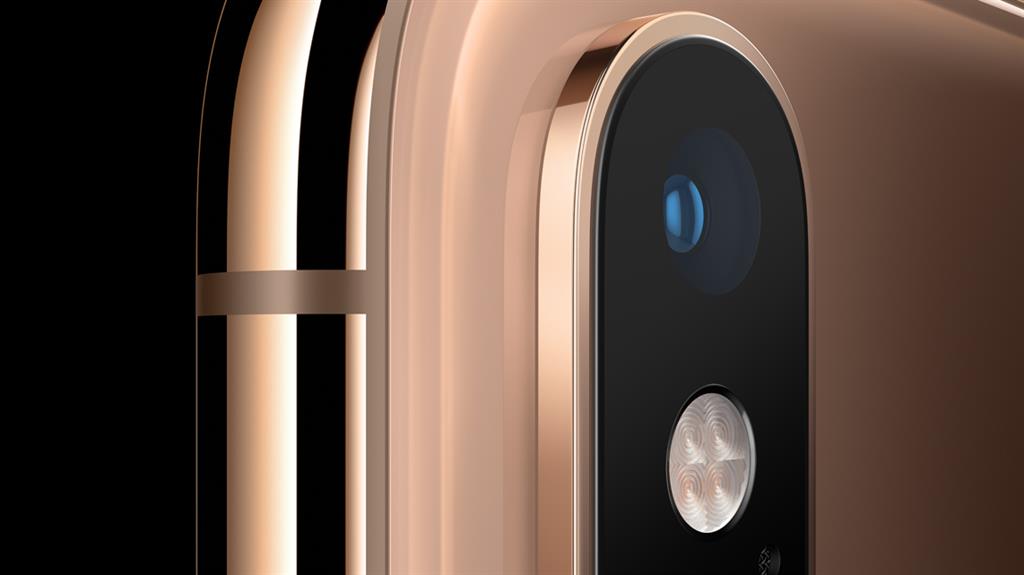 The CMOS sensors in our smartphone cameras were originally developed by Nasa’s Jet Propulsion Laboratory to use in tiny cameras on interplanetary spacecraft. Frankly, when it comes to wannabe influencers clogging our Instagram feeds, Nasa has a lot to answer for. 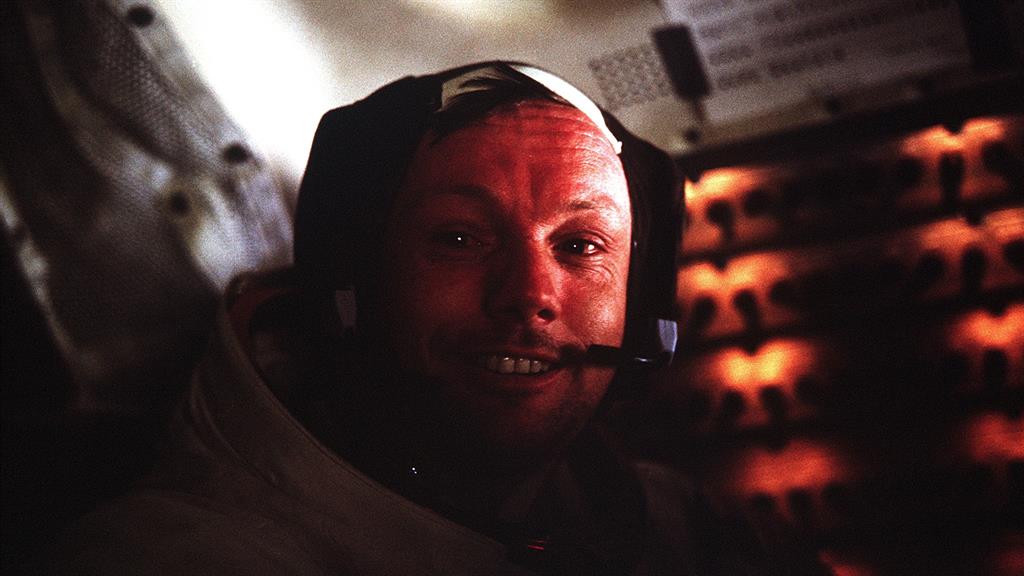 The words spoken by Neil Armstrong as he set foot on the Moon were transmitted through a modified version of the Plantronics MS50 headset. Originally designed for airline pilots, the ‘snoopy headset’ paved the way for the wireless technology we use today. 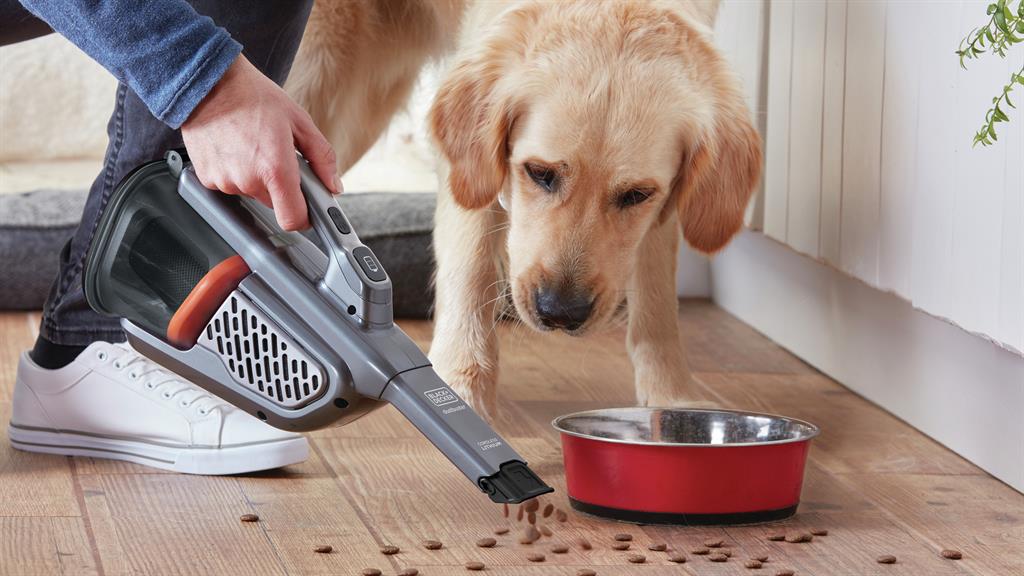 When Apollo astronauts needed a portable drill to extract samples from below the Moon’s surface, power tool firm Black & Decker got the call. The company later developed this technology into the first mini cordless vacuum — and one of the most satisfying brand names ever. 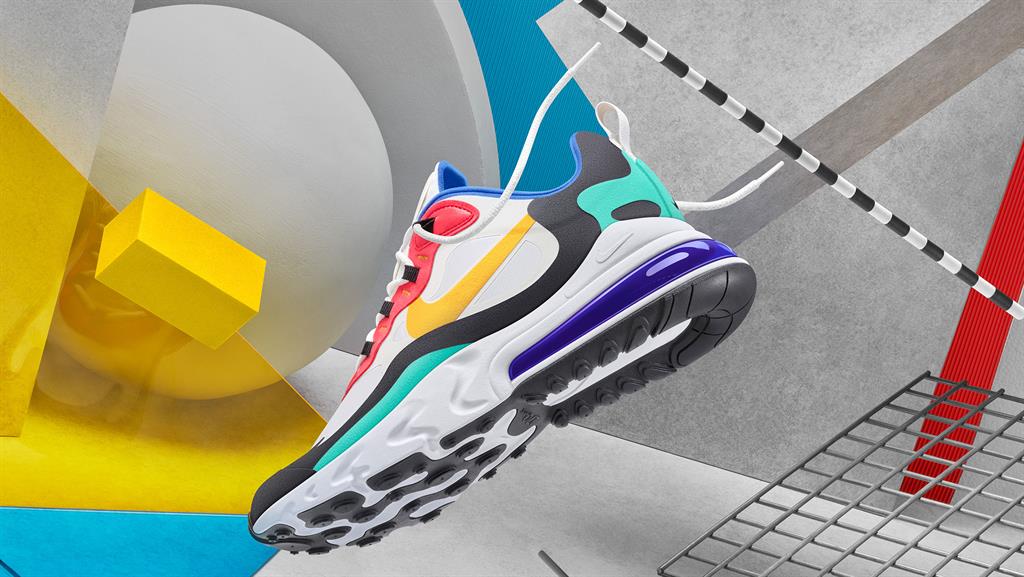 Building on a method used to make spacesuit helmets, a former Nasa engineer came up with the idea of putting interconnected air cells into hollow trainer soles. He pitched it to Nike and the result is the air-cushioned kicks that we still wear today.