■ In the run-up to the Gavin & Stacey Christmas special, Metro discovers the renaissance of the place they call Barrybados, just nine miles away from Cardiff…

‘OH! TRACEY. What’s occurring?’ sing out the dulcet Welsh tones of my tour guide, Shân, from across the packed car park. Promising to follow in the footsteps of the great Vanessa Shanessa Jenkins, Shân is my oh-so charming enabler for my pilgrimage to Barry Island, in honour of the Gavin & Stacey festive special, which airs on Christmas Day.

I ain’t gonna lie to you, like the rest of the nation, I’m desperate to know what’s happened to the Shipmans, the Wests and even the Sutcliffes in their ten-year absence.

Did the gang settle in Barry or Billericay? And what about poor jilted Dave Coaches, who turned out to be the surprise hottie of the series — is he, ahem, still ‘riddled’?

Lying nine miles south-west of Cardiff, Barry Island has been the Welsh capital’s favourite seaside resort since the 1930s. Butlin’s Barry Island opened in 1966, and while the holiday camp is now long gone, the Pleasure Park and twin sandy beaches still draw the crowds each summer.

But since its TV stardom in the much-loved comedy, Barry Island has experienced a quiet renaissance, which locals call the Gavin & Stacey effect. Awesome Wales (awesome.wales) a zero-waste grocery and coffee shop has opened in Barry town centre, Whitmore+ Jackson (facebook.com/whitmoreandjackson), a hip cafe-bar, serves craft gin and vegan doughnuts on the front, while Hang Fire, a Southern-inspired diner (mains from £15, hangfiresouthernkitchen.com), has popped up in the regenerated Pumphouse on Barry Docks. Uncle Bryn would be beside himself.

First stop on Shân’s Barry tour (shanswalestours.com) is Trinity Street, for a selfie outside number 47, where Gwen and Stacey lived, next door to Doris and across the road from Uncle Bryn. As it goes, the Essex scenes were also filmed in South Wales, so we head to Gavin’s house on Laburnum Way, an unassuming cul-de-sac in nearby Dinas Powys.

Then we swing by the Glendale Hotel in Penarth, aka Capriccio’s Italian, before it’s back to Barry for a pint at the Colcot Arms Hotel, where Smithy held his dismal quiz night. But the highlight of my tour is St Cattwg’s Church in Llantwit Major, a tidy little village outside Barry, where Gavin and Stacey got married.

Although more of a daytripper destination, especially since Butlin’s closed for business, Barry Island has a handful of B&Bs, including Gail’s Guest House (doubles from £51, gailsguesthouse.co.uk). I’m staying at the Vale Resort (doubles from £90 B&B, valeresort.com) ten miles north of Barry, which starred as the wedding fair venue in series one (remember Smithy’s stag plans and Nessa in that outfit? ‘I’ll take all of this but I don’t need another whip…’) and, like our Ness, is popular with the Welsh rugby team. 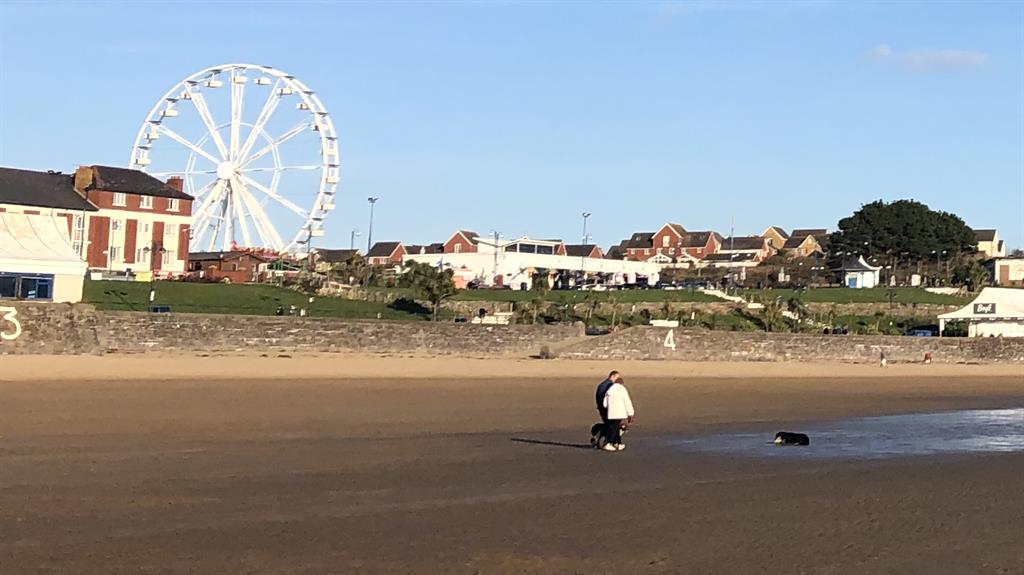 Although locally called Barrybados, Barry Island is more Cardigan Bay than the Caribbean and even on this bright winter day, the wind that whips off the Bristol Channel is as sharp as one of Nessa’s comebacks. To warm up, Shân treats me to a coffee and a cream cake at Marco’s Cafe (facebook.com/pages/Marcos-Cafe-Barry-Island) on the promenade, where Stacey worked in series three.

‘Ten years ago, folk round here would think I’d gone mad if I opened the café in November. The island always closed down for winter. But here we are now, a coffee culture in Barry,’ grins the actual Marco, his café packed out on this frosty morning.

Of course, Barry’s not all posh coffee and pesto paninis now — it still has a traditional seaside charm with three-for-a-pound doughnut stalls, dodgems and the neon-lit Gordon Bennetts Night Club on Barry seafront. Reluctantly, it’s time to say ‘hwyl fawr Barry’, and as I board the train home, Shân shakes my hand, gives me a wink and grins, ‘It’s been a blast, sugar t**s.’

Singles from London Paddington to Barry Island from £19.50, thetrainline.com. For more info, head to visitthevale.com and visitwales.com