A COUPLE who struggled to juggle childcare and jogging started taking their kids in a buggy — and now both have world records for running pram marathons.

Dr David Bruce, an orthopaedic surgeon, and wife Jessica, loved to run but found it difficult making time for their hobby when their children were born, so took them on their jogs in special buggies.

They compete pushing Daniel, three, and 18-month-old Emilia, who will often sleep through the events. David recently completed a marathon in two hours and 54 minutes. Last year Jessica, who runs a biotech firm, became the fastest woman to finish the challenge, with a time of three hours and 22 minutes.

The couple have busy routines but still manage to run at least five times a week with a specially adapted three-wheel buggy. Jessica, 35, said: ‘Running was such an important part of our lives together that when we decided to have children it wasn’t so much a question of stopping running, but rather how we would fit it into our new life with a baby.

‘The running buggy was a perfect solution. It enabled us to continue running together and also allowed me to run whilst my husband was at work.’

The couple, who met at cross country club while studying at Oxford, made their world record times at the Abingdon marathon. Guinness World Records has yet to verify David’s attempt but confirmation is expected. He attached cameras to the buggy as evidence of his achievement on October 21. 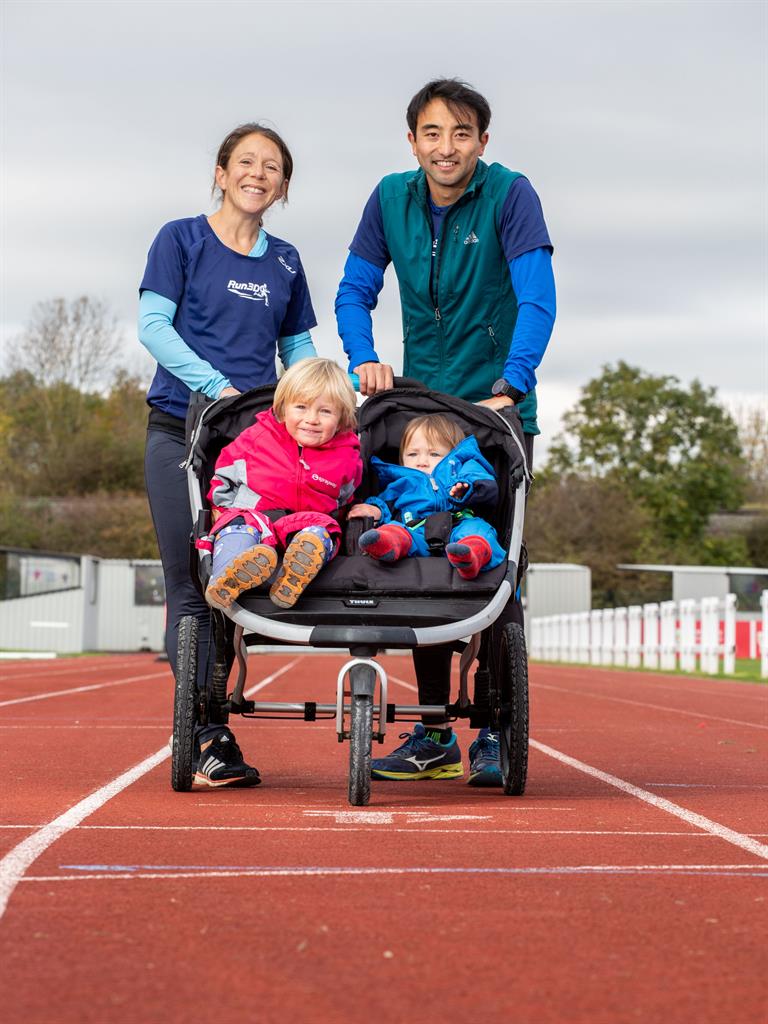 David, 33, said of the marathons: ‘Daniel will go for a bit of a snooze and Emilia will be pointing at things whenever we run. Pushing the buggy probably adds about 30 minutes to my time but I felt great during the record attempt.’

The family live in the village of Hambrook, South Gloucestershire, and David often runs eight miles to work at Bristol children’s hospital, where he is a registrar. He has also been fundraising for the hospital’s Grand Appeal and Bristol Orthopaedic Trust.

Jessica added: ‘Our message to parents with young children is: don’t give up on running. There is a way to make it work — exercise is so important.’

Guiness World Records said: ‘At present, the record for the fastest marathon pushing a double pram [male] is still held by Paulo Franco, however it is likely that the Guinness World Records team is still waiting to receive or review evidence for Dr Bruce’s attempt.

‘When an adjudicator is not present, all evidence outlined in the guidelines, such as independent witness statements, photographic evidence and video evidence, must be sent to the Guinness World Records team for review before a record can be verified.’