ADMIT IT: when you hear the words ‘craft beer’ you imagine bearded hipsters and flat caps. Well, think again. In the smart, unassuming Midwestern town of Columbus — where you’re more likely to find white-collar finance or government workers — a profusion of brewers is putting the region’s state capital on the international map.

The US has always been a craft beer stronghold. Cities like Portland and Denver boast microbreweries numbering into the hundreds but where Columbus stands out is in the immediacy of the boom and the impact it’s had beyond the taphouses.

This intoxicating increase has given the place a new identity that unfolds as you explore. Breweries come into view on every turn of the wide city streets, particularly in the trendy Short North area, a fiercely liberal district in a majority Republican state. The previously bland, corporate downtown area has been transformed by bars like the 16-Bit Bar (16-bitbar.com), in a traditional arcade, and Wolf’s Ridge (wolfsridgebrewing.com), an acclaimed experimental boutique brewer.

Neighbourhoods are being rejuvenated by, and even built around, the brew bars and Columbus is now listed as one of the fastest-growing cities in the US.

‘Seventh Son was one of the first places in the area,’ says Castore, whose brewery is slightly off the main drag of Short North High Street. ‘Nobody used to come here. There wasn’t a lot of housing, then steadily it blew up. Some of the developers said we kickstarted the renovation because we were always busy and it showed people would come here. I think craft breweries do a good job of going into a semi-industrial spot that works well for a brewery but not for many other things, then bringing people into the neighbourhood.’

Columbus is built in the traditional American mould. The Scioto river divides downtown from the artsy Franklinton, skyscrapers dominate the centre and the suburbs flow out from there. Go further, though, and you’ll find the craft beer effect taking hold in the backcountry.

Rockmill Brewery (rockmillbrewery.com) in nearby Lancaster is as good an advert for the Midwest as you’ll find. It’s a Belgian-style brewery offering eloquent brews and is found in a traditional farmhouse reminiscent of Clark Kent’s humble upbringing (in Smallville, not Krypton). ‘With a lot of breweries opening up in the city, to maintain that rural, rugged countryside vibe is a nice change of pace,’ says founder Matthew Barbee.

Once a city largely defined by the Ohio State University — the third-largest university campus in the US — Columbus can now call itself one of the hottest craft beer destinations in the country. It’s a status bolstered by the arrival of Scottish beer behemoth BrewDog, which has made Columbus its US HQ, setting up a brewery, a hotel and several bars from 2016.

‘What we loved about Columbus was that it’s still on that journey, rather than at the destination,’ says Brewdog’s ever-polarising co-founder, James Watt. ‘We wanted to go somewhere exciting and diverse.’

‘If you’re from out of town, the craft breweries give you a sense of what make Columbus unique,’ adds Castore.

Ask anyone there and they’ll tell you they’ve given Columbus a whole lot more than that.

Finnair flies from London to Columbus via Chicago from around £511 rtn, finnair.com. Rooms at Sheraton Columbus Capitol Square from $96/£75pn, marriot.com. experience columbus.com 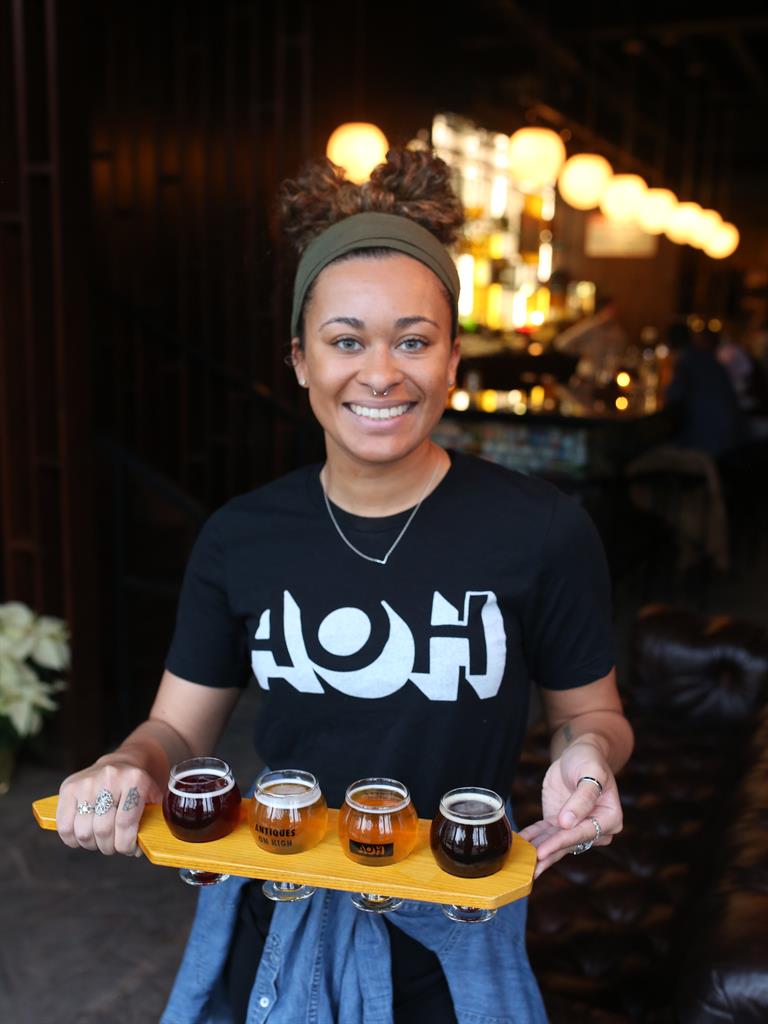 ■ An arts community is rising in the parts of Columbus rejuvenated by brewhouses. Head to Franklinton to check out the studios at 400 West Rich (400westrich.com), see what’s on at the Franklinton Playhouse (redherring.info), then grab a drink at Land Grant brewery (landgrantbrewing.com).

■ There’s a real sense of community around the Columbus Crew soccer team (columbuscrewsc.com), who were saved from a 1,000-mile franchise relocation to Texas by a local buyout. See them play or head to the Arena district to watch ice hockey team Columbus Blue Jackets live in NHL action (nhl.com/bluejackets).

■ For the beer aficionados, head to Antiques On High (antiquesonhigh.com, right), sister bar of Seventh Son and in the German Village. The focus is on sour and wild ales, a ‘niche within a niche’ of craft beer, while The Loft (bookloft.com) is a nearby 32-room book store that’s a must for bibliophiles.