The opening running at a rain-hit Monza was suspended twice after Kimi Raikkonen and Sergio Perez both crashed out.

On a drying track, Leclerc, who registered his maiden grand prix victory in Belgium last weekend, put his Ferrari at the top of the order.

Leclerc (pictured top and below) finished ahead of the McLaren duo of Carlos Sainz and Lando Norris, with championship leader Lewis Hamilton fourth. 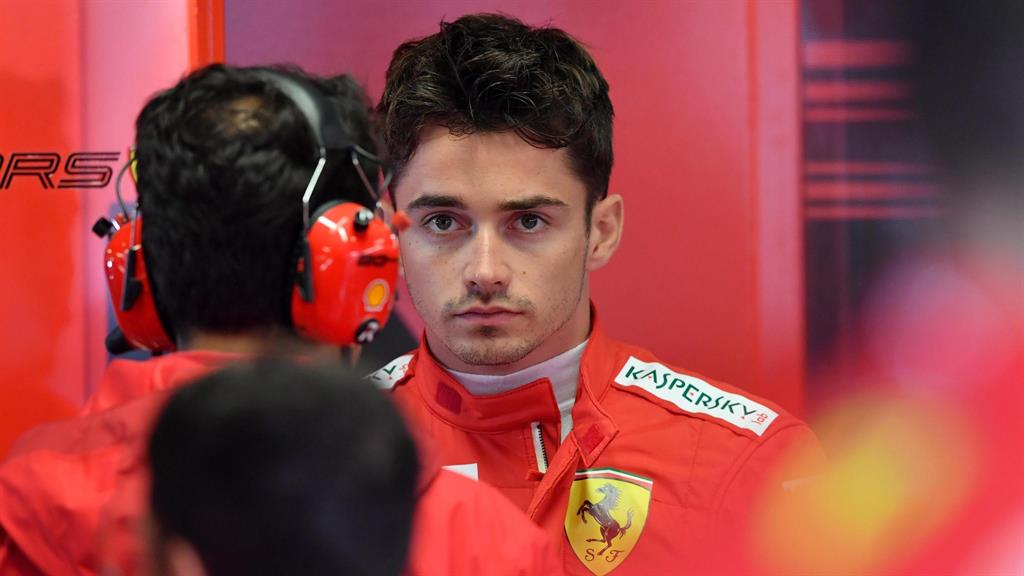 The first action of the weekend started on a wet track and Raikkonen became the first high-profile victim of the tricky conditions.

Raikkonen lost control of his Alfa Romeo at the final corner, heading backwards into the barrier.

The veteran Finn walked away from the incident, but sustained damage to his car. The red flags were issued as Raikkonen’s car was removed from the gravel.

The session had only just re-started when Perez then fell foul to the wet track. The Mexican driver spun 360 degrees as he entered the back straight, sliding on to the grass and crashing into the wall.

The force of the impact wrecked the back of Perez’s Racing Point, and — although, like Raikkonen, he emerged unscathed — his mechanics will face a mighty repair job to turn his car around for second practice later today.

As the rain stopped, and the track started to dry, a number of drivers switched to slick tyres in the closing stages of the 90-minute running.

Toro Rosso’s Daniil Kvyat was the first to take advantage of the easier conditions, as the Russian went fastest before he was bumped off the top by Sainz and then by Leclerc.

Leclerc would finish 0.306 seconds ahead of Sainz with Norris half-a-second back in third.

Hamilton, who holds a 65-point championship lead heading into the final round of the European campaign, spent the final minutes following Sebastian Vettel, before clocking the fourth quickest time.

Red Bull driver Alex Albon was fifth ahead of Kvyat. The Russian was followed by Max Verstappen and Vettel.