CAROLINE FLACK described the inner turmoil over her arrest for allegedly assaulting her boyfriend in a previously unseen social media post shared by her family.

The 40-year-old former Love Island presenter said ‘her whole world and future was swept’ from under her feet following the incident with boyfriend Lewis Burton in December.

It came as the inquest into her death in London heard that the TV star was found ‘lying on her back’ after an apparent hanging.

The hearing at Poplar coroner’s court, which lasted four minutes, was adjourned by assistant coroner Sarah Bourke until August 5.

No members of Flack’s family were present at the inquest opening.

Flack was found dead at her rented home in London on Saturday morning.

Her time of death was registered at 2.36pm.

A family lawyer said she died by suicide.

Coroner’s officer Sandra Polson said police were driving through Northwold Road in Stoke Newington on Saturday when they were flagged down.

She said: ‘They followed informants into a residential address and found a woman on her back.’

Police attempted resuscitation, which was then continued by paramedics, but she was pronounced dead at the scene.

Her body was identified by her sister, Jody Flack.

The inquest heard that the provisional cause of death was given as suspension by ligature.

It came as an unpublished Instagram post, shared posthumously by Flack’s family, revealed how the TV presenter felt the ‘walls’ she had built around herself had ‘collapsed’.

And she denied assaulting former tennis player and model Burton (pictured below), saying it was an ‘accident’.

She had been due to go on trial next month.

She wrote: ‘I have always taken responsibility for what happened that night. Even on the night.

‘But the truth is …. It was an accident.

‘I’ve been having some sort of emotional breakdown for a very long time.

‘But I am not a domestic abuser.

‘We had an argument and an accident happened. An accident.’ 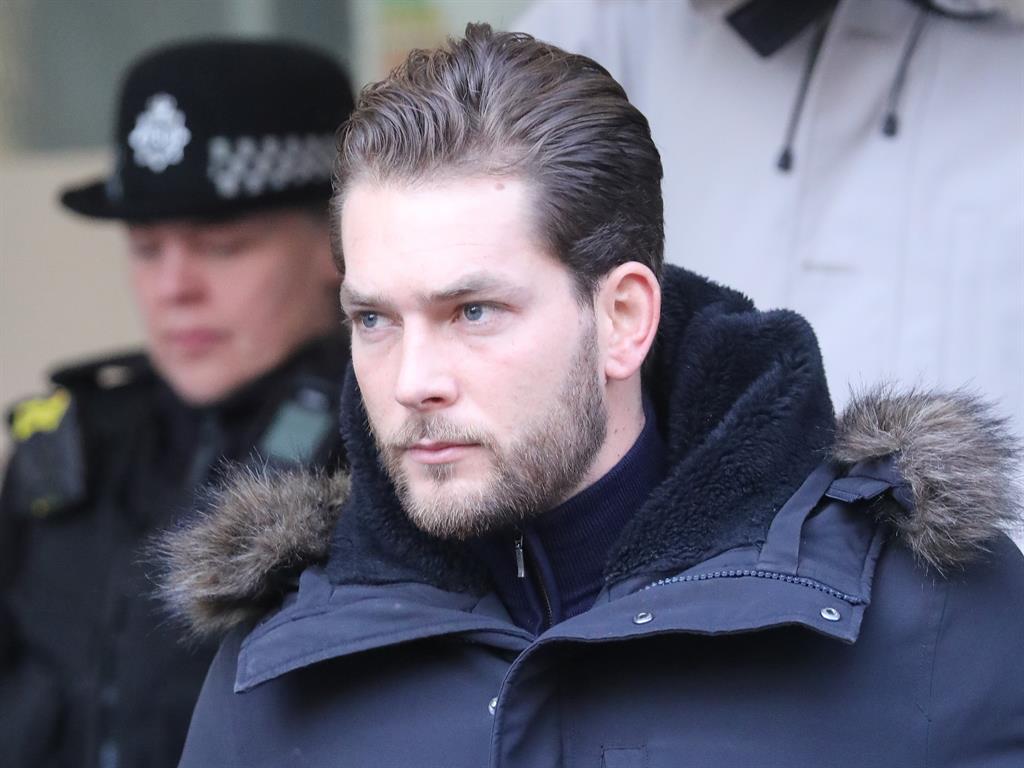 Flack said pictures from the alleged crime scene featured her own blood and were sold to a newspaper.

She said: ‘That was something very sad and very personal.

‘The reason I am talking today is because my family can’t take anymore.

‘I’ve lost my job. My home. My ability to speak.

‘And the truth has been taken out of my hands and used as entertainment.

‘I can’t spend every day hidden away being told not to say or speak to anyone.’

She added: ‘I’ve been pressing the snooze button on many stresses in my life — for my whole life.

‘I’ve accepted shame and toxic opinions on my life for over 10 years and yet told myself it’s all part of my job. No complaining.

‘The problem with brushing things under the carpet is …. they are still there and one day someone is going to lift that carpet up and all you are going to feel is shame and embarrassment.’

Flack closed the post with an apology to her family and friends.

She said: ‘I’m so sorry to my family for what I have brought upon them and for what my friends have had to go through.

‘I’m not thinking about “how I’m going to get my career back”.

‘I’m thinking about how I’m going to get mine and my family’s life back.

‘I can’t say anymore than that.’

Flack’s mother, Chris Flack, shared the message in her local paper, the Eastern Daily Press, in Norfolk, where the TV personality grew up.

She said her daughter was advised not to share the post on social media, but that her family ‘want people to read it’.

‘It was describing how she was feeling and what she had gone through — no more than that,’ her mother said.

‘It was not blaming anyone or pointing any fingers.’

She said her daughter, whom she calls Carrie, sent it to her ‘at the end of January but was told not to post it by advisers’.

The TV star pleaded not guilty to assault by beating at a magistrates’ court hearing in December, which was told her partner did not support the prosecution.

She was released on bail but was ordered to avoid any contact with Burton ahead of the trial.

The ITV2 dating show did not air on Saturday or Sunday as a mark of respect to her family and returned on Monday with a tribute to the TV star, who started hosting the programme in 2015.

A statement from Francis Ridley, director of Money Talent Management which counted Flack among its clients, said: ‘Caroline loved Love Island. It was her show.

‘She lived it. And I’m sure she hoped that one day she would be allowed to return to it.

‘Sadly, not only will this never happen now, but in the last few weeks of her life the world of television ceased to become a priority for her as she battled to just see a way through to getting her life back.’

■ Samaritans can be contacted for free 24-hours a day on 116 123 or online at samaritans.org