A SOLDIER has been left seriously injured and unable to walk after he was run down by a car outside a nightclub where a row had broken out.

Joshua Adams-Mitchell, 21, is feared to have been knocked over deliberately by the driver of the blue Mercedes in the early hours of New Year’s Day.

A 27-year-old man from Dewsbury, West Yorkshire, has been arrested on suspicion of wounding with intent.

Police said there was no evidence to back claims that the soldier had been targeted by a group of Asian men in the club who heard him talk about his service in the Yorkshire Regiment. 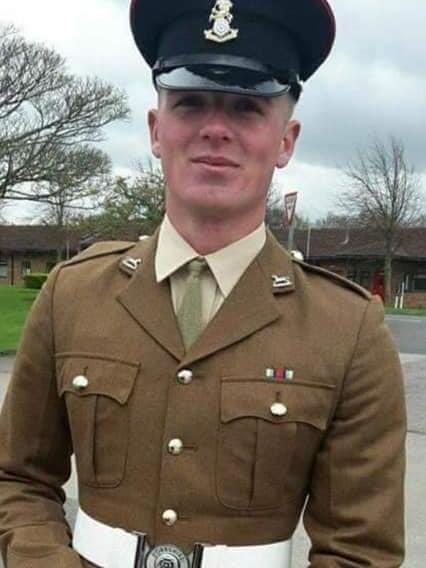 ‘The full circumstances leading to the point at which the victim was struck are under investigation,’ a spokesman said. ‘He is in a serious but stable and conscious state, talking to family at his bedside and, when he is ready, the police will be speaking to him.’

Mr Adams-Mitchell was run down after an altercation inside the TBC Club spilled into the street in Batley, West Yorkshire. One witness told the Huddersfield Examiner the car hit him at 50mph, hurling him in the air.

Claims he was targeted over his job were fuelled by a social media post from English Defence League founder Tommy Robinson, a convicted fraudster whose real name is Stephen Yaxley-Lennon.

Ch Insp Ben Ryder said: ‘We would like to reassure service personnel that police have no evidence that the victim was targeted due to his Army service, or that it is motivated by racism.’

Mr Adams-Mitchell has a damaged lung, facial fractures and possible nerve damage to a leg. His partner is pregnant, his sister Emma Adams wrote on a GoFundMe page she has set up for him.