BORIS JOHNSON has been warned not to ‘play games’ with his threat to break international law over Brexit.

The prime minister’s introduction of legislation that could override his own withdrawal agreement with the EU ‘is casting a dark shadow over the ongoing negotiations’, Germany’s Europe minister Michael Roth said.

Both sides have continued to clash over the UK Internal Market Bill, which prompted Brussels to threaten legal action if it was not changed by the end of the month.

The ninth round of formal talks resumed yesterday, with fisheries and the level playing field on the agenda.

Mr Roth (pictured top) said both sides must now ‘work with urgency to find a sensible solution’ and warned ‘trust has suffered a lot recently’ because of the controversial bill being debated by MPs.

‘The EU cannot and will not accept this approach. It is casting a dark shadow over the ongoing negotiations,’ he wrote in Der Spiegel magazine.

‘With readiness to compromise from both sides, with mutual trust and goodwill, a fair deal is still possible. But it is not helpful to play games,’ he said.

On Monday, Cabinet Office minister Michael Gove told Brussels the UK would not back down over parts of the bill he said were needed as a ‘safety net’ for peace if trade talks failed.

The transition period with the EU ends on December 31 and Mr Johnson has set an October 15 deadline to reach a new trade deal with the bloc. 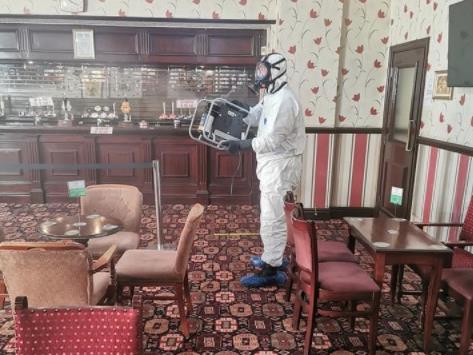 BENEDICTINE has lost its biggest customer while the Burnley Miners Social Club is shut for deep-cleaning due to Covid-19. The 600 members drink 1,000 bottles a year of the liqueur — a favourite since the East Lancashire Regiment were based at its French home in Normandy in World War I and mixed it together with water to make Bene’n’hot.

SHOPPERS are continuing to enjoy falling prices as retailers try to increase footfall and recover from the effect of lockdown.

For the second month in a row, the BRC-Nielsen shop price index dipped 1.6 per cent, with non-food goods dropping 3.2 per cent.

The British Retail Consortium said it was another good month for consumers, but warned a no-deal Brexit may mean supermarkets footing a bill of £3.1billion a year.

And Nielsen’s Mike Watkins said the next rent payments will be a good indicator for which retailers are likely to survive the winter.

NOKIA has signed a major deal with BT to make it one of the winners from the 5G ban on Huawei.

The Finnish firm will be BT’s largest equipment provider, supplying base stations and antennas to radio sites used by the EE 5G mobile network, while also working across BT’s 2G and 4G networks.

UK mobile providers will be banned from buying new Huawei 5G equipment after December 31. They must also remove the Chinese firm’s 5G kit from networks by 2027 due to US sanctions saying it posed a risk to its national security.

Huawei has denied the claim.

GREGGS is in talks with staff over reducing their hours to ‘minimise the risk of job losses’.

The high street bakery chain said it needs to ensure wage costs reflect the ‘level of demand’ expected after the furlough scheme finishes at the end of October.

Sales have picked up over the past month but the Newcastle-based firm said it faced ‘challenging conditions’ as Covid infection rates rise.

■ B&M BARGAINS aims to open 45 stores this financial year after a surge in sales. The discount retailer estimates pre-tax profits for the six months to last Saturday will come in at £285million, higher than forecast.

■ GOING green is too expensive, say 23 per cent of shoppers. Most want to help the planet but still put price before environmental concerns, such as whether food is locally grown, shows a poll by Beyond the Box.

■ MORTGAGE approvals for home buyers leapt to their highest level since 2007 in August. Some 84,700 loans were rubber-stamped last month as the market recovers from lockdown, the Bank of England said.

■ ASDA will be the first supermarket to have vegan-only aisles. Plant-based products, including a vegan cheeseboard, will be placed on their own at its 359 outlets after a 275 per cent annual rise in vegan sales.

■ PENDRAGON has roared back after a £44.1million hit from the lockdown. The car dealership, which owns Evans Halshaw and Stratstone, saw profits of £7million in July and August, after big losses in the six months to June 30.