ACROSS the country, companies have been changing direction to help beat the coronavirus pandemic.

Whether it is helping manufacture much needed PPE, distributing food parcels to the shielded, or switching to manufacture chemicals needed to keep hospitals hygienic, the Federation of Small Businesses says 57 per cent of all small business owners carried out a community role during the crisis.

And despite facing their own difficulties during this time, 80 per cent of small firms volunteered and/or contributed to a local community organisation or charitable cause during the crisis, according the FSB’s New Horizons Report. Here are just three of the many firms donating their time and expertise in the battle against coronavirus.

Turning their hand to sanitisers

GLOBAL chemicals company Ineos is the world’s largest manufacturer of hand sanitiser’s main ingredients — ethanol and isopropyl alcohol — but before the pandemic it had never produced a hand cleanser at all.

It’s been a steep learning curve, but since Covid-19 struck, it has built six factories across the world, including one in the UK, designed to produce huge quantities of the product, which it has provided for free to hospitals and other medical and care centres.

The company took just ten days to build the factories, which have the facilities to manufacture and bottle the sanitiser. During this time, there were three different teams working eight-hour shifts around the clock on rotation to get the factories into operation. 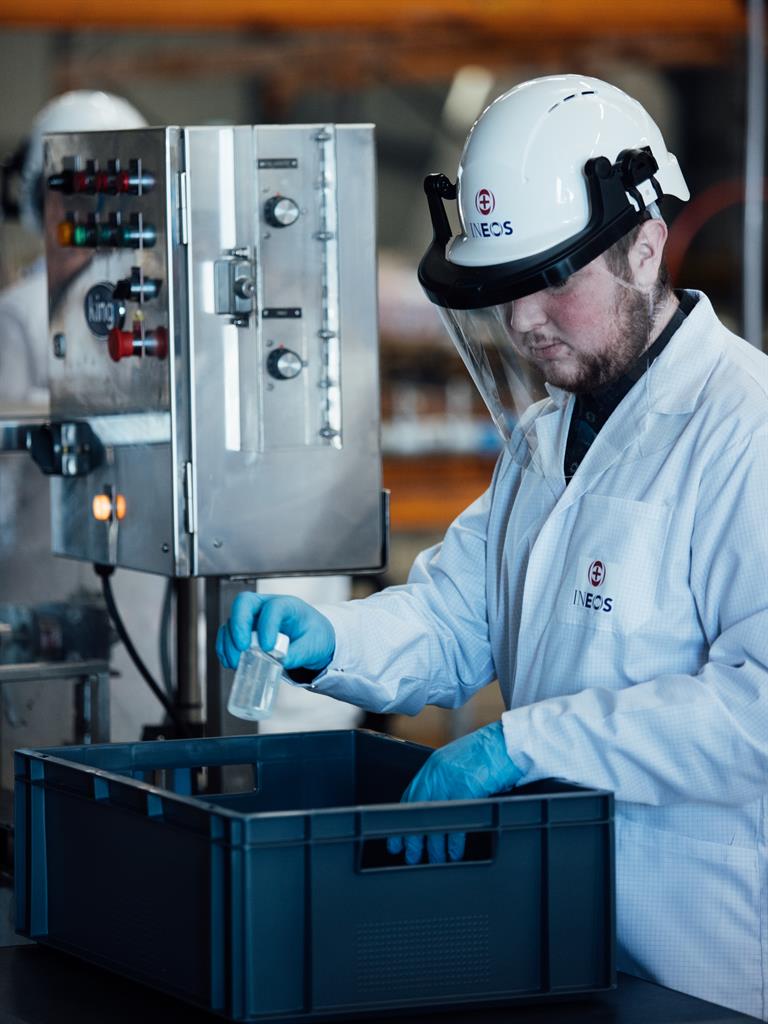 In the UK, Ineos has been transporting the main sanitiser components between an existing factory in Grangemouth, Scotland, and its new hand-sanitiser plant in County Durham. This was an immense challenge, and the company required special government permission to transport chemicals in order to make the product.

‘Team Ineos are very used to moving cycles and kit around. They have helped with the logistics to get the product to the right places at the right time,’ explains Richard Longden, Ineos’ group communications manager. ‘We’re all in this together and we wanted to use our expertise to do our bit.’

‘Team Ineos is used to moving at speed but ten days from start to finish for four plants already was incredibly tight,’ adds Sir David. ‘I am grateful to everyone in the entire Ineos family for their hands-on approach to getting the job done.’

So far, Ineos has provided 109,000 litres of hand-sanitiser in Europe and 72,000 litres in the UK, and it is also providing the product in the US.

The company hopes to continue to manufacture and supply the sanitiser in the future, believing that ‘it will become a part of the “new normal”’ for everyone, even after the immediate crisis has passed.

Jim Ratcliffe, owner of Ineos, says that the company is determined to continue its good work.

‘Ineos is a company with enormous resources and production skills,’ he says. ‘If we can find other ways to help fight the coronavirus, we are absolutely determined to do our part.’

SHOPPING and working as we loosen lockdown will require an array of new gadgets, and engineering boss Luke Parker has set his design team to work creating products that will stop the spread of coronavirus.

Acres, in Melbourne, Derbyshire, has donated its new Footle product to stores and restaurants in the local area, so that they can help their customers to shop safely. The Footle is designed to open doors using either the top or bottom of the foot, preventing germs spreading from surfaces when lots of customers put their hands on the same handle.

The company has also created a similar product that allows customers to open doors with a forearm, for doors that would otherwise require shoppers to turn a knob to open a latch.

‘This will not only significantly reduce the spread of infection but will reduce the amount of time spent disinfecting doors,’ says Luke. ‘We supply them locally for free and further afield for a small charge.’

After the success of the Footle, the company has moved on to other safety equipment, including screens to separate employees in offices, and a bespoke screen that allows learner train drivers to be in a cab with a second driver without putting either staff member at risk.

‘We’ve tried to pivot the business because so many of our customers have furloughed staff,’ explains Luke. ‘So we started to think about how we could support local companies.’

Acres now has a full catalogue of Covid-19 safety products, including a Health Station safety screen for taking staff temperatures when they arrive at workplaces in the morning, which the company turned round for a customer within a week.

‘This reduces the risk to frontline workers,’ says Luke. ‘The Health Station is being used already by several large employers who are working to make their workplaces safe.’

Acres, which was established in 1947 to make agricultural tools, usually produces solutions for manufacturing, such as platforms, safety barriers and lifting equipment. ‘Every product is designed specially and every piece of work is different,’ says Luke. The company, which has 30 employees, has had to furlough its own workers due to the restrictions and to take steps to ensure its own staff are safe, which has reduced capacity, but Luke believes that focussing on these new items has helped it to keep going.

‘I have to really thank my design team,’ he says. ‘They have been coming up with some fantastic ideas to manufacture essential products that will support both manufacturers and key workers.’

From bespoke cabinets to face shields

WHEN the pandemic struck, premium kitchen designer Herringbone, based in Canterbury, Kent, wanted to do its bit to help the local community.

The company usually makes bespoke, hand-made kitchens, so had a team of expert joiners and designers on hand who could no longer work safely in customers’ homes.

‘At first, I thought the only things we would be able to make were coffins, and that’s a pretty grim prospect,’ says founder Will Durrant, 34. ‘In the end, it was the wife of one of our joiners, who is a DT teacher, who came up with the solution.

‘She was asked to make face shields to help the local hospital, but her school wouldn’t allow her back onto the premises to do it. So we said we would try to help.’

Will was worried that his carpentry skills wouldn’t be up to the job, but the team came up with four different prototypes and put them onto Instagram Stories to gauge demand and work out which design was the most appropriate for the healthcare profession.

‘The response was overwhelming,’ he says. ‘Our shields were different from lots of others because they didn’t use foam, so they could be disinfected and reused again and again.

‘We made 600, and they’ve been distributed all over the South East, to hospitals, care homes and other settings.’ 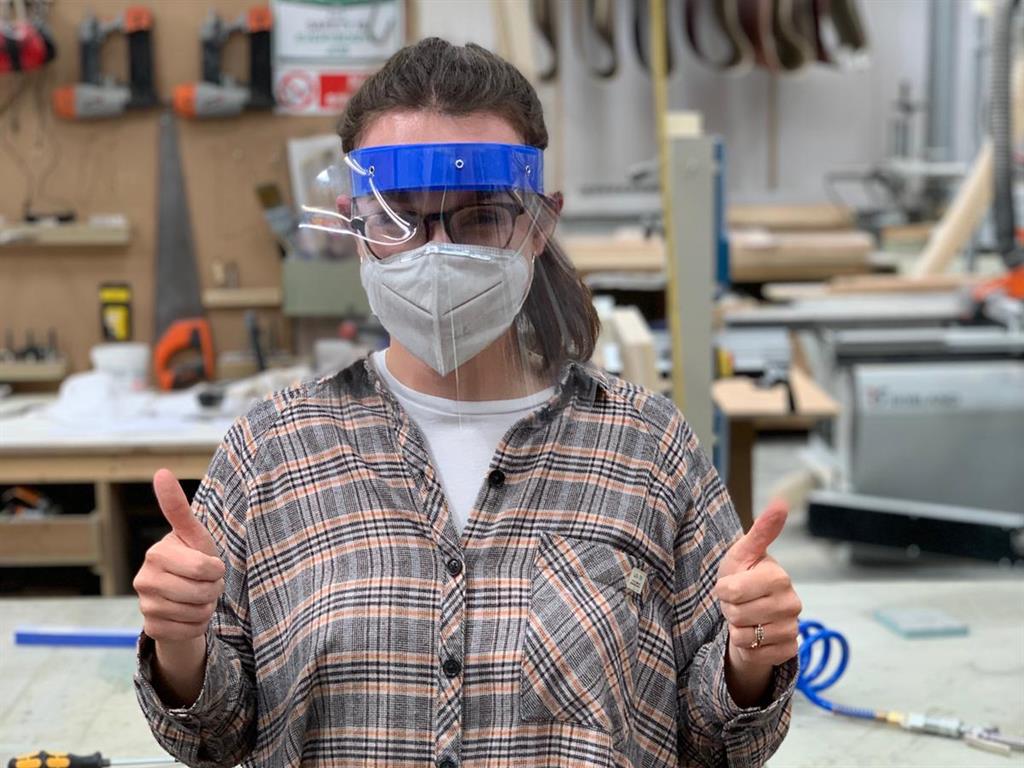 The company, which employs 25 people, has had to work with a reduced staff in order to comply with social-distancing rules while making the shields. ‘Everyone wanted to help 100 per cent,’ Will says.

His wife, Elly, also works for the company, so the couple were able to make the manufacturing process a family affair, involving their six-year-old son. ‘I told him it was his DT lesson,’ Will laughs.

In the last few weeks, demand for the shields has ‘tapered off’, he says, so the company has gone back to designing kitchens. ‘I guess that the supply of PPE equipment has improved,’ he says.

Herringbone, which had to furlough staff at the height of the pandemic as it was unable to install kitchens safely, is now beginning to work at full strength again, dealing with a backlog of orders from customers who had ordered earlier in the year.

‘We’d had a really strong start to the year,’ Will says. ‘We could see there was something bad coming, so we’d planned as much as we could. We stockpiled materials and got far ahead.

‘Even during the pandemic, we’ve still been working as much as we can. Our kitchen designers have been able to work the entire time, and there has been plenty of customer demand.

‘Despite the disruption, we’ve only had to disappoint one customer, and he has only had his delivery time moved by one day.’