BORIS JOHNSON’S proposals for a new Brexit deal have been rejected by the Irish government and left European Union leaders ‘unconvinced’.

The prime minister (above) told MPs he had made a ‘genuine attempt to bridge the chasm’ with Brussels by making compromises as time runs out before the scheduled October 31 Brexit date.

But Irish premier Leo Varadkar said the Brexit plan ‘falls short in a number of aspects’ while his deputy Simon Coveney said ‘if that is the final proposal, there will be no deal’.

And Donald Tusk, president of the European Council — the body made of up national leaders — said he told Boris Johnson ‘we remain open but still unconvinced’ during talks today.

Downing Street said the proposals to address problems with the Irish border were the ‘broad landing zone’ and the ‘basis for discussion’ in a conciliatory move after No10 sources had previously claimed they represented a final offer to Brussels.

Mr Varadkar said he could not fully understand how the UK envisaged Northern Ireland and Ireland operating under different customs regimes without the need for checkpoints.

‘We need to explore in much more detail the customs proposals that are being put forward as it’s very much the view of the Irish government and the people of Ireland, north and south, that there shouldn’t be customs checkpoints or tariffs between north and south,’ he said.

Mr Varadkar said there were five ways to avoid a hard border — the reunification of Ireland; the Irish Republic re-joining the UK; the UK remaining in the single market and customs union; the border backstop mechanism; or the UK reversing the Brexit decision.

On the prospect of the UK abandoning Brexit and staying in the EU, he said: ‘All the polls since prime minister Johnson became prime minister suggest that’s what the British people actually want, but their political system isn’t able to give them that choice.’

In further signs of the resistance to Mr Johnson’s proposals in the EU, the European Parliament’s Brexit Steering Group said it had ‘grave concerns’ about the plan.

‘The BSG does not find these last-minute proposals of the UK government of October 2, in their current form, represent a basis for an agreement to which the European Parliament could give consent,’ they said.

European Commission spokeswoman Natasha Bertaud said ‘we have many questions on the text’ of the Brexit proposal that ‘need to be answered by the UK and not the other way around’.

Mr Johnson told the Commons today that while his proposals did not deliver all his Brexit goals they were better options than to ‘remain a prisoner’ of the current situation.

But he accepted that they were ‘some way from a resolution’ on the situation.

Mr Johnson urged MPs to ‘come together in the national interest behind this new deal’ ahead of the October 31 Brexit date, but first he must get it passed by the EU, where reactions were becoming increasingly critical.

He said the plans represented ‘a genuine attempt to bridge the chasm, to reconcile the apparently irreconcilable and to go the extra mile as time runs short’, with a deal effectively needing to be agreed before an October 17 summit of EU leaders.

Jeremy Corbyn (below) responded by saying no Labour MP could support the ‘reckless deal’, which he said would jeopardise the Good Friday Agreement.

Mr Johnson’s plans would see Northern Ireland apply EU rules on goods but stay in a customs territory with the UK.

This would create a regulatory barrier for goods crossing the Irish Sea and a customs border between Northern Ireland and the Republic — but Mr Johnson has insisted there would be no need for checks or infrastructure at the frontier.

The PM said his plans had been driven by the need to ‘protect’ and ‘fortify’ the peace agreement.

But even if he gets the support of EU leaders for a deal, he must get it through a parliament that has so far been hostile to Brexit proposals. 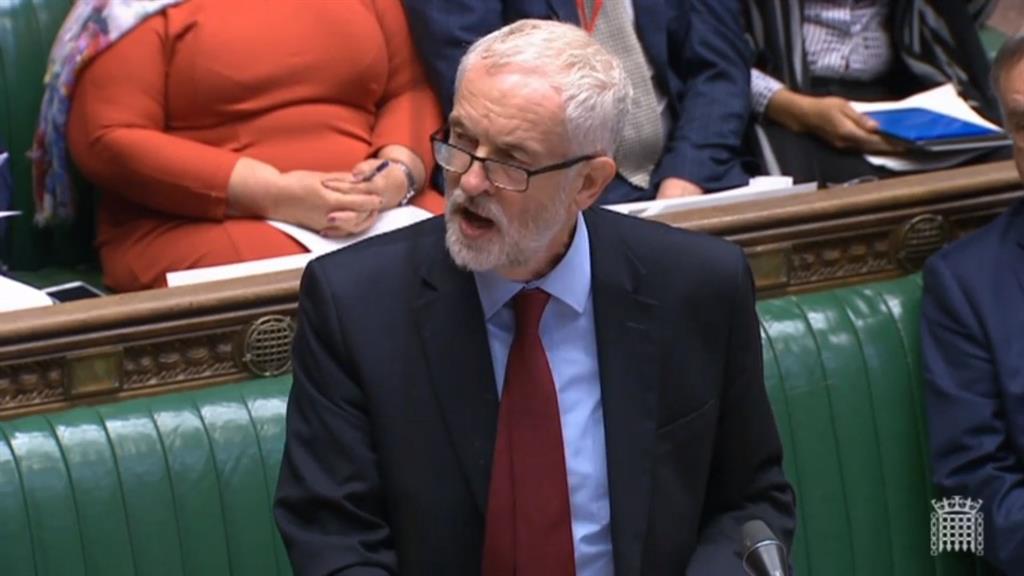 The PM appeared to be building support from the DUP, Eurosceptics within his own party and some opposition MPs wishing to avert a no deal.

But their stances could well alter if Brussels insists on changes, as seems likely.

The plans require the currently suspended Northern Ireland Assembly to approve the new arrangements, with a vote every four years — something which has caused concern in Ireland.

Stormont voting structures mean a bloc of MLAs from either the nationalist and unionist community — which includes Mr Johnson’s DUP allies — can veto certain decisions, even if a majority of members back them.

Mr Coveney said: ‘We cannot support any proposal that suggests that one party or indeed a minority in Northern Ireland could make the decision for the majority in terms of how these proposals would be implemented in the future.’

The prime minister’s official spokesman said the four-year limit ‘is the one that we believe is sensible’.