BORIS JOHNSON insisted the Tories can win the General Election as he launched his campaign yesterday after a tricky 24 hours for his party.

The prime minister made his hero Sir Winston Churchill’s ‘V for Victory’ gesture (below) in a speech in Downing Street, on his return from visiting the Queen to officially launch the election period.

As the battle formally commenced, Labour leader Jeremy Corbyn hit the campaign trail in Telford and the Lib Dems’ Jo Swinson began her offensive in London. 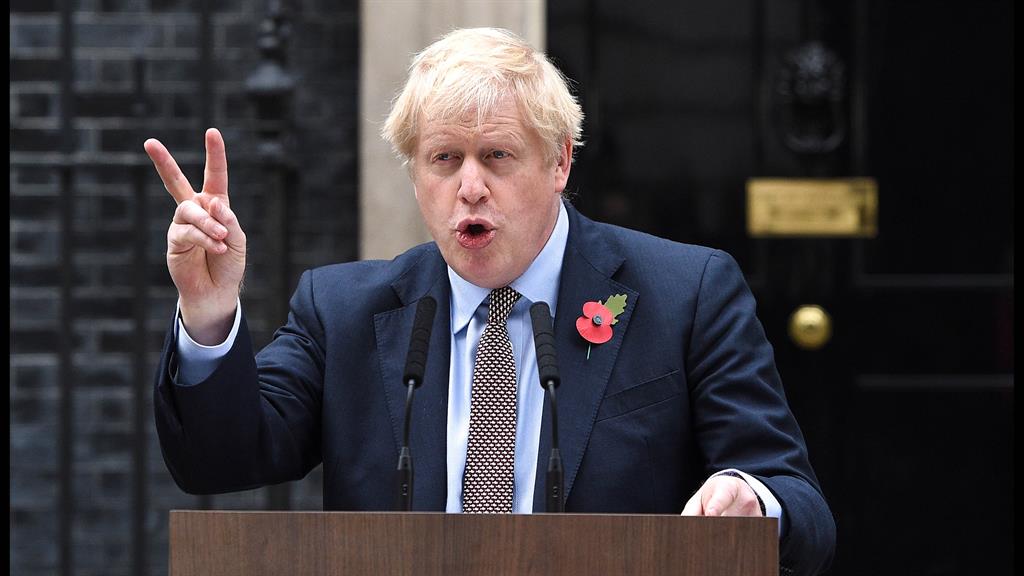 Mr Johnson claimed Labour wanted to ‘spend the whole of 2020 having two referendums’ on both Brexit and Scottish independence, despite the party saying it is opposed to another poll north of the border.

He told voters a new Tory government would ‘get Brexit done’ and ‘unleash the potential of the whole UK’.

But his address was overshadowed by the shock resignation — just minutes beforehand — of his Welsh secretary Alun Cairns, the first cabinet minister to quit during an election campaign in more than 100 years.

Mr Cairns stepped down amid claims he knew of serious allegations about a former aide before allowing him to become a Welsh Assembly candidate.

The blow for the prime minister came after Commons leader Jacob Rees-Mogg had to apologise for appearing to accuse Grenfell Tower fire victims of lacking common sense.

And a fresh row erupted over an online Conservative advert that critics said contained malicious editing of comments from Sir Keir Starmer, the shadow Brexit secretary.

But Mr Johnson made no mention of the controversies as he pledged to deliver Brexit in weeks if elected.

During the Tory campaign launch at Birmingham’s NEC last night, he was greeted by thunderous cheers and laughter as he told the party faithful parliament had frustrated his efforts to take Britain out of the EU ‘like an anaconda that’s swallowed a tapir’.

‘For three-and-a-half years we have had non-stop political manoeuvring to stop Brexit and thwart the will of the people,’ he said. ‘The whole Brexit thing is holding us all back — it’s like a bendy bus jack-knifed on a yellow box junction.’

In his speech in Downing Street earlier he said: ‘Of course I don’t want an early election. But we have got to the stage where we have no choice because our parliament is paralysed.’

He also warned that failure to vote Tory could lead to the public ‘waking up on Friday December the 13th and finding Corbyn at the head of his Technicolor yawn of a coalition’. Technicolor yawn is a slang term for vomiting.

Mr Johnson added: ‘On day one of the new parliament in December, we will start getting our deal through so we can get Brexit done in January and unleash this country’s potential.

‘We’ll put uncertainty behind us — families and businesses will be able to plan. Let’s make 2020 the year of investment and growth, not the year of two referendums.’

The build-up to his speech in Birmingham was disrupted by pro-immigration demonstrators who skirmished with police at the entrances to the NEC.

Mr Johnson, who has written a book about Sir Winston’s role in history, made no direct reference to him as he copied his gesture.

But one critic said he may follow in the revered wartime leader’s footsteps by losing his first election as prime minister to Labour opponents offering a radical programme.

Labour activist Tom Hinchcliffe wrote in The Times that he lacked a ‘convincing domestic agenda’ and could ‘suffer the same fate as Churchill’s “V for Victory” campaign’ did in July 1945 when he lost to Clement Attlee.