BORIS JOHNSON climbed aboard his ‘Con Air’ plane yesterday for a flying three-nation tour during which he ruled out independence for Scotland and warned that a vote for Jeremy Corbyn could break up the Union.

The prime minister visited a whisky distillery in Scotland, a crisp makers in Northern Ireland and a Tetley tea factory in Stockton, Co. Durham.

On his trip he denounced Labour leader Mr Corbyn and the SNP’s Nicola Sturgeon as ‘yoke mates of destruction’ threatening a second independence referendum. And he insisted the Conservatives were offering ‘investments in our infrastructure’ as well as an end to ‘the whole Brexit debate’.

On the Scottish leg of his travels, Mr Johnson said the Tories were the ‘party that is going to keep our fantastic United Kingdom together’.

He said: ‘It’s thanks to the prudence of the Conservatives that we are able to make some investments in our infrastructure, in technology, in our public services. The biggest threat we face at the moment is the uncertainty that is still being caused to our political system by the whole Brexit debate.’

Asked whether he could give a cast-iron pledge to voters to not agree to another Scottish independence referendum, he said: ‘Absolutely. There is no case whatever, because people were promised in 2014 — absolutely clearly — that it would be a once-in-a-generation event and I see no reason why we should go back on that pledge.’

And he warned of a potential Labour-SNP pact, saying: ‘It’s perfectly obvious that Jeremy Corbyn is going to rely on the SNP to get him into power and to do that he’s done a shady deal to have a second referendum.’

She said: ‘The only thing Boris Johnson should be coming to Scotland to do today is apologise for the chaos he and his party have subjected us to.

‘He is a prime architect of the Brexit vote and the utter shambles it has now led to.

‘A vote for the SNP is a vote to escape Brexit and to put Scotland’s future in Scotland’s hands — not Boris Johnson’s.’

Meanwhile, chancellor Sajid Javid said in Manchester that the Tories would increase borrowing to pay for new infrastructure in the North.

His pledge received a cautious welcome from Henri Murison, director of the Northern Powerhouse Partnership, who said ‘all parties will need to show in their manifestos the fiscal credibility of their plans in order for anyone here in the North — business or individuals — to take them seriously’.

Am I in the lead? PM’s dog on walkies-about 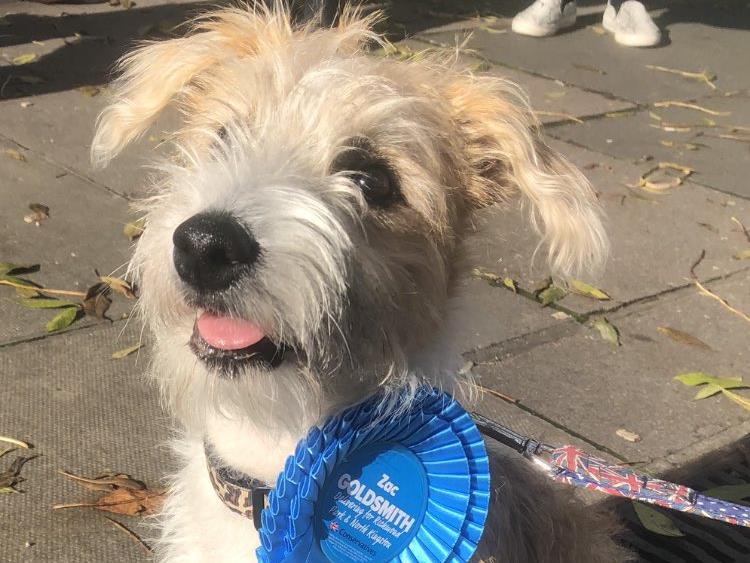 ONE Tory supporter was spreading some puppy love on the campaign trail yesterday.

Dilyn the dog had a blue rosette pinned to his collar as he accompanied Boris Johnson’s partner Carrie Symonds as she went out canvassing in south-west London.

Ms Symonds posted a series of photos as the pair joined Zac Goldsmith, who is defending a slender majority of 45 in the Richmond Park seat.