BORIS JOHNSON yesterday blamed Labour for the early release of London Bridge killer Usman Khan, despite the party not being in power since 2010.

The prime minister said Khan — freed halfway through a 16-year jail sentence — was on the streets because of laws introduced by a ‘leftie government’.

And he said the Ministry of Justice was now reviewing the licence conditions of every convicted terrorist released from prison — which is ‘probably about 74’ people — to ‘make sure there is no threat’. Last night West Midlands Police said a man had been arrested in Stoke-on-Trent ‘following a review of the existing licence conditions of convicted terrorism offenders’.

Appearing on BBC One’s The Andrew Marr Show, Mr Johnson was pressed on cuts to prison and probation services and the rising level of assaults on staff.

He said: ‘That is why this new Conservative administration is putting £2.5billion into our prison service.’ Asked why it had not happened under successive Tory governments, including one in which he served as foreign secretary, he added: ‘I’m a new prime minister, we take a different approach.’ Mr Johnson said the early release of criminals who are as ‘dangerous’ as Khan was ‘repulsive’ and vowed to take steps to ensure it does not happen in the future. 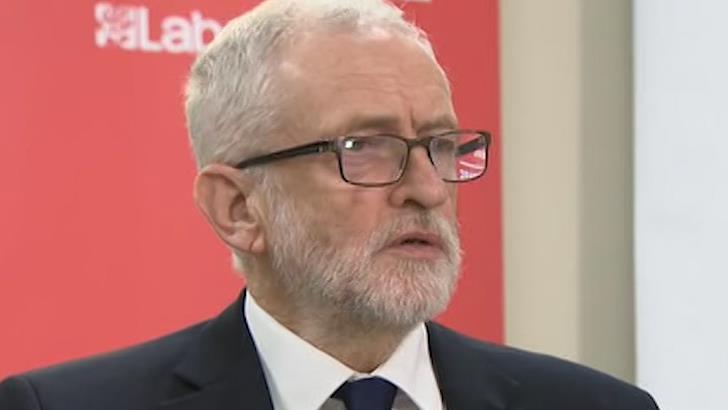 But Jeremy Corbyn (above) said convicted terrorists should ‘not necessarily’ serve their full prison sentence, adding that it ‘depends on the circumstances’. In a speech in York, Mr Corbyn paid tribute to the emergency services who responded to the terror attack and said people have ‘a right to know from political leaders what steps they will take to ensure public safety’.

He said: ‘I will always do whatever is necessary and effective to keep our people safe. The police who put themselves on the line to protect us will have the authority to use whatever force is necessary to save lives.

‘If police believe an attacker is wearing a suicide vest, then they are right to take the action that they do and did.’

The two leaders spoke out after David Merritt said the death of his son Jack, who was killed by Khan, must not be used as a ‘pretext for more draconian sentences or for detaining people unnecessarily’. Foreign secretary Dominic Raab insisted ‘no one wants to see the politicisation of this’. But on Sky News’ Sophy Ridge On Sunday, Liberal Democrat Sir Ed Davey said Mr Johnson ‘seems to be politicising this at a time when we really should be thinking about the families’.

■ THE prime minister has again swerved committing to a grilling by Andrew Neil — despite claiming he was ‘perfectly happy to be interviewed by any interviewer called Andrew from the BBC’. Mr Johnson has come under pressure to agree a half-hour interview with the presenter, who subjected the SNP’s Nicola Sturgeon and Labour’s Jeremy Corbyn to intense questioning last week.