A 14-YEAR-OLD border collie has become a surrogate mum — to a litter of rescued kittens who she nurtures as if they were her own.

Patient pooch Skye is completely devoted to her six cute ‘babies’, who she grooms and even cleans after toilet time.

Adorable pictures show the extent of their bond as the days-old orphaned kittens snuggle up to ‘natural’ mum Skye, who doesn’t mind being used as a climbing frame by them. 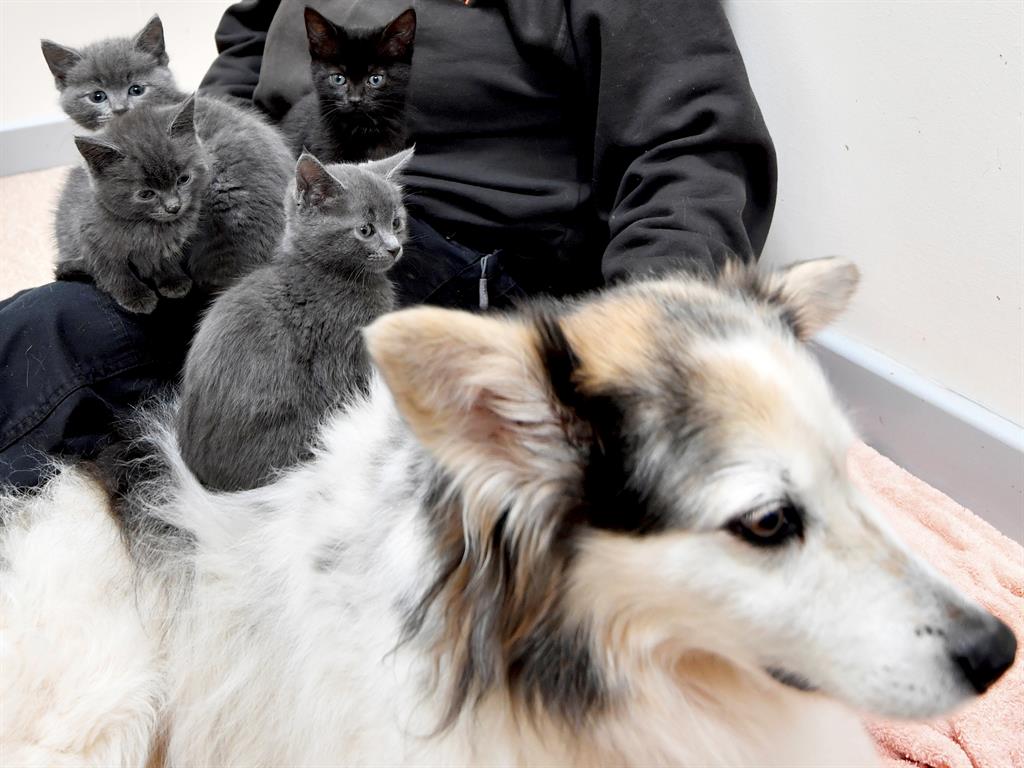 The tiny kittens, five girls and one boy, were found by builders at a demolition site and handed in to Oak Tree Animal Charity in Wetheral, Cumbria.

Caroline Yon, Skye’s owner and intake team leader at the charity, took on the role of foster carer and hand-reared the kittens round the clock.

She enlisted the help of Skye, herself a rescue dog, who cares for the litter as though they were her own puppies, having helped her nurture other orphaned animals taken in by the centre. 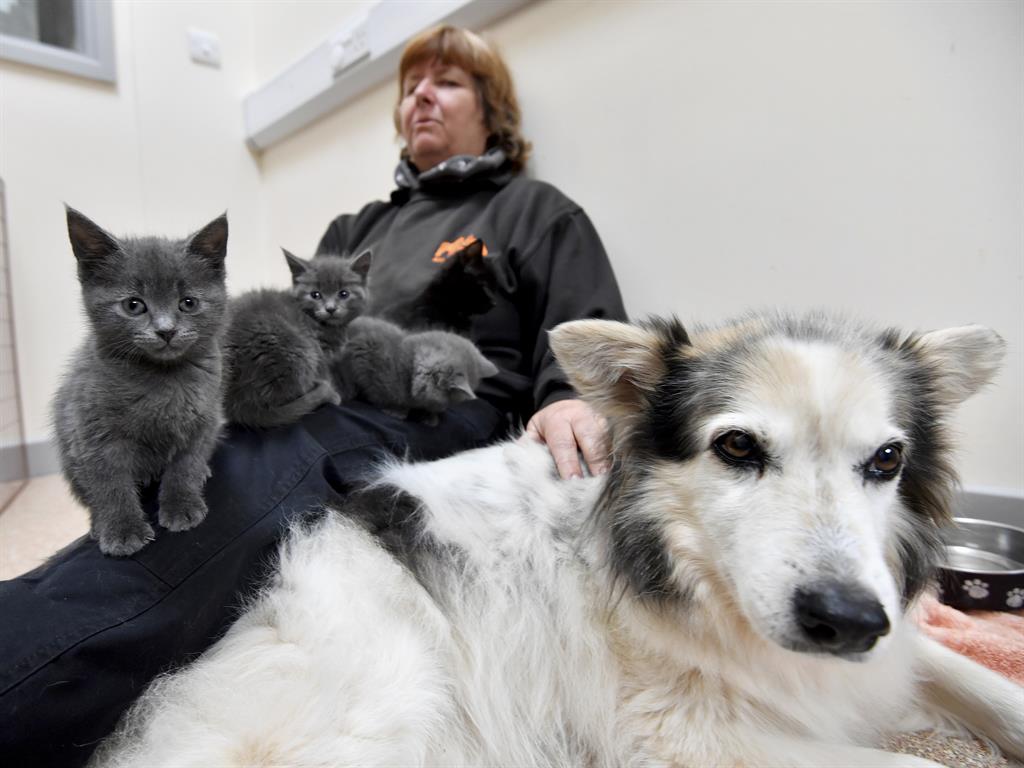 Caroline said: ‘Skye has a history of nurturing baby animals of all kinds. She had two litters of her own when she was very young and helped raise a litter sired by my old collie Dodger.

‘She has also helped with orphaned lambs, so she was the obvious choice to fulfil some of the duties that a mother cat would instinctively do.’

Apart from producing milk, Skye does everything a mother would do for the kittens, including grooming and cleaning them after toilet time. 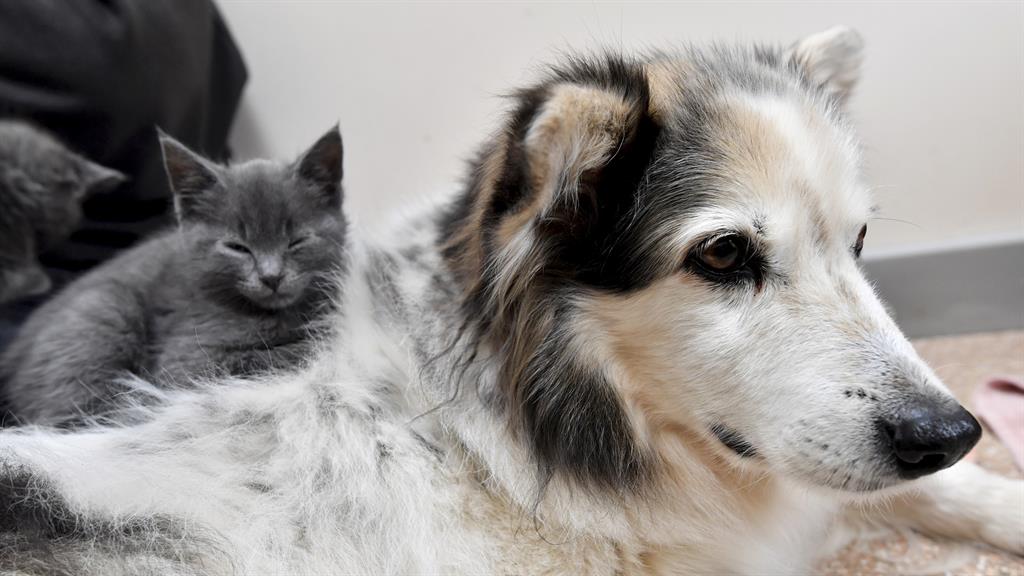 Caroline added: ‘The kittens were starting to look a bit greasy coated as they weren’t being groomed as often as they should.

‘With six in the litter, meal times could take an hour by the time they were all fed, winded and toileted.

‘Skye was a natural, she soon had their coats shining and fluffy and she was super diligent not only ensuring they toileted after every meal, but cleaning up thoroughly afterwards.

Staff at the animal centre believe the mother cat may have been feral. 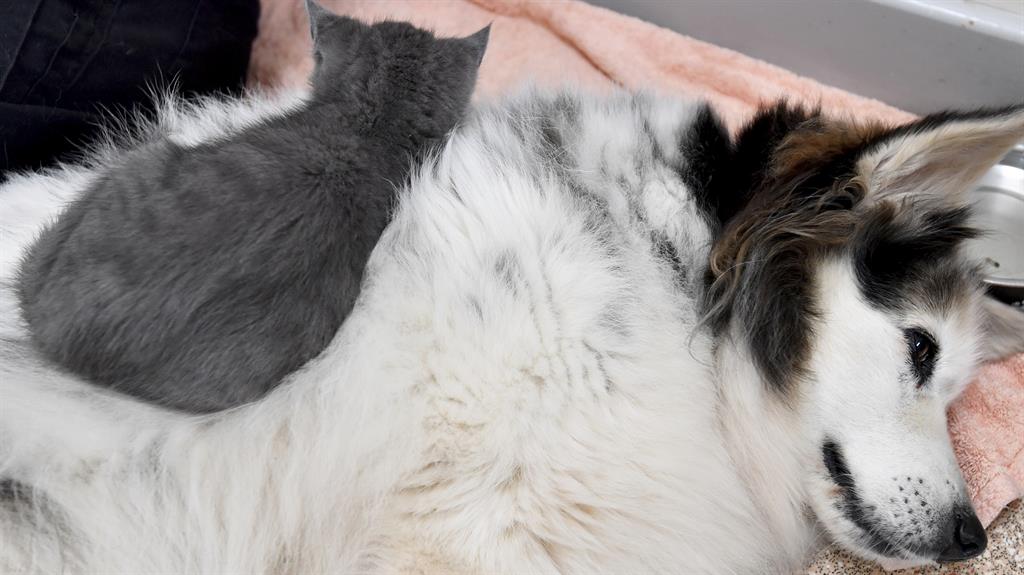 Caroline added: ‘We managed to catch her and brought her to Oak Tree and had her tested and spayed, but she wasn’t interested in the kittens, so we returned her to the area we found her.’

Five of the kittens have already found homes, but one black kitten is still looking for a forever family.

Caroline, who has adopted two of the kittens herself, added: ‘Black cats are always harder to rehome, but these are so sociable and love all the attention.

‘We have given them all names of well-known singers.

‘Mine are called Amy Winecat and Paloma Peanut. We also have a Kitty Perry and a Shakira Sam.’