AROUND 100 firefighters struggled to contain a blaze that tore through a six-storey block of flats in east London yesterday.

Residents were evacuated and roads sealed off as balconies in De Pass Gardens, Barking, were engulfed in flames.

Fortunately, there were no casualties from the fire, according to the London Ambulance Service. It broke out less than a week before the second anniversary on Friday of the inferno in Grenfell Tower in the west of the capital that claimed 72 lives.

‘Ground floor to the sixth floor are alight,’ the London Fire Brigade tweeted. ‘We’ve currently got 15 fire engines and around 100 firefighters attending.’

Fire crews from Barking, Dagenham and East Ham, along with others from surrounding stations, were called shortly after 3.30pm. The fire was under control by 7pm.

De Pass Gardens is thought to be part of Riverside Gardens, a development by Bellway Homes. Neighbour Venilia Barista Amorim said the flats are around five years old and consist of two to three-bedroom properties. 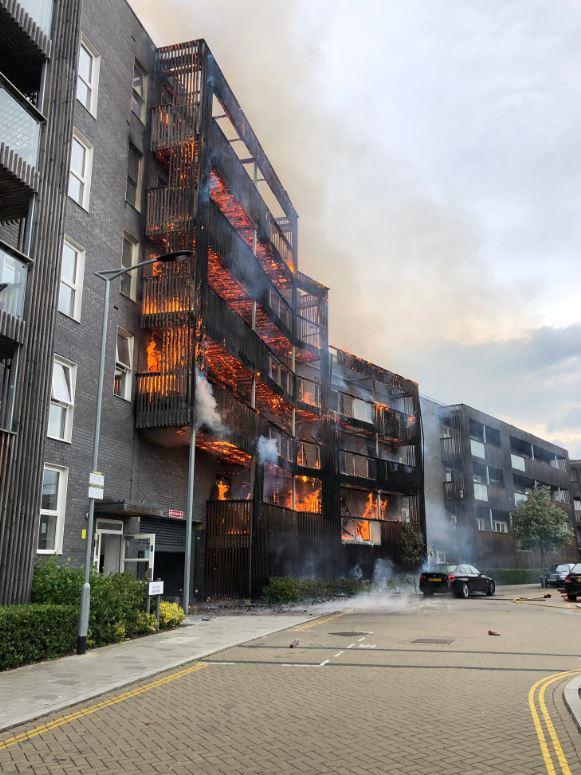 She tweeted: ‘Fire on the Barking Riverside estate. Huge!!! Serious!!!

‘Only a couple of weeks after the residents association specifically asked the builders Bellway Homes who said the wood cladding was fire retardant and perfectly safe.

‘Everyone has come out of the building, there’s only been a few people treated for some inhalation.

‘I live right across from the building, but police won’t allow me to open the windows, for smoke. There’s about eight or nine fire engines and there’s multiple police cars here.’

The cause of the blaze is unknown.