RORY STEWART said the choice was between ‘fantasy and reality’ as he laid into Boris Johnson at the launch of his Tory leadership campaign yesterday.

The international development secretary joined other contenders in attacking the runaway favourite — expected to launch his own campaign today — accusing him of ‘promising what we cannot deliver’.

Pledging to stop a no-deal, he said: ‘What they are telling you are fairy stories. There is some magical path you are going to be led on by a great prophet. But it is the word of all the false prophets. Nobody can get no-deal through parliament because MPs, including me, will stop it.’ 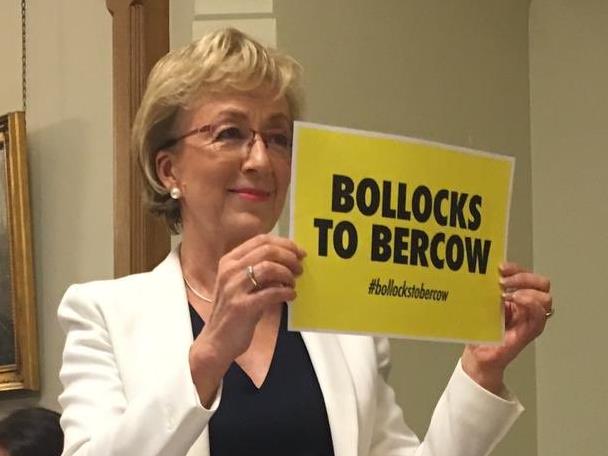 Rival Andrea Leadsom (pictured above) said Mr Johnson would not be able to get his plan past MPs. She also showed her contempt for Commons speaker John Bercow by displaying a ‘bollocks to Bercow’ poster at a lunch with reporters.

Mark Harper — who launched his own campaign — warned a broken tax promise from Mr Johnson would ‘put rocket boosters under Nigel Farage’.

And health secretary Matt Hancock slammed Mr Johnson for hiding from media. ‘Everybody who puts their name forward to be prime minister should be open to scrutiny,’ he told BBC Radio 4’s Today.

European Commission president Jean-Claude Juncker warned the contenders they will not be able to renegotiate Theresa May’s deal.

■ TORY Remainers look set to back Labour’s new bid to rule out a no-deal Brexit. If passed, it will give MPs control of Parliament’s Brexit timetable on June 25. It could force the new premier to extend Article 50 beyond October 31, to stop the UK leaving the EU ‘without a deal and the consent of the people,’ said Labour’s Brexit spokesman Keir Starmer.