BASTILLE are one of the biggest bands in the world right now, with a string of hit singles, albums and mixtapes striking a chord as they tap into the realities of relationships and life. The band have collaborated with anyone who’s anyone, played arenas around the world and are about to headline the Radio 1 stage at Reading and Leeds. But what can we expect from their festival shows?

Frontman Dan Smith says: ‘We want to show off a real cross section of what we do. We bring in a selection from our mixtapes and albums and we have quite a lot to choose from now,’ he laughs, over his umpteenth black coffee of the morning.

‘We’ve always not given a f**k about genre and we try to span different sounds. I spent most of my formative years going to festivals and you get a sense of what makes a good set. It’s not about being self-absorbed as a band, it’s about giving people a good time. If we’re headlining a tent and it’ll be one of the last things people see, I want it to be the best send-off.’ 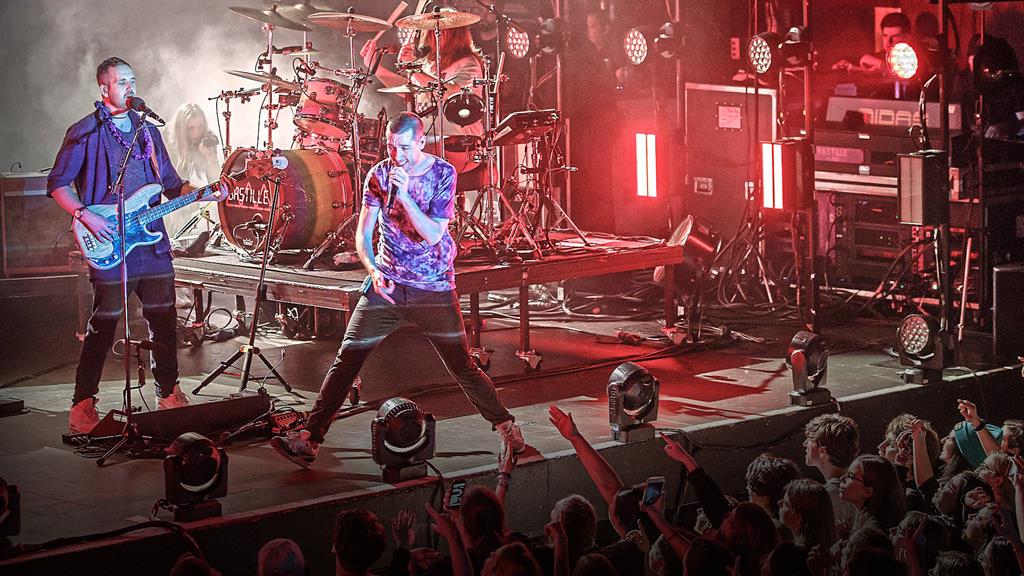 The band released their third studio album earlier this year, and Doom Days tells the story of an evening, explains Dan. ‘In reaction to our last album, we wanted to make this slightly mad, sort of 1990s-leaning record that was about completely losing your mind and forgetting about problems in your life and relationships and what you see on the news and social media.’

‘Having it starting at quarter past midnight and ending with waking up on the kitchen floor the next morning, even though it’s a tight timeframe, there’s so much to talk about and look at. I find the night fascinating,’ he says. ‘I guess at a time where people are caring less about albums it was good just to double down and make a concept record that had something to say and gesture towards bigger things. It felt exciting.’

Two of their biggest songs, Happier and Joy, on the surface sound very upbeat but have darker lyrics. Dan says: ‘I’m fascinated by the tightrope between euphoria and absolute despair, and I think some of the best, most interesting, heart-wrenching music makes you feel sad about something and yet it’s uplifting at the same time. I’m drawn to big, memorable melodies.

‘Happier is one of the most depressing songs but it’s stitched in euphoria. It was never meant to be for Bastille, but it’s not up to you to decide sometimes. It’s funny to hear people react to it,’ he shrugs in bemusement. ‘There’s a real openness, simplicity and honesty that we don’t have elsewhere. In my head I have these notions, however absurd they may be, of our music coming from a slightly odd angle with pop culture and history and myth. There’s an ambiguity in our lyrics sometimes because I want people to write their own story in and around it.

‘We stitched the album with the language of now and these phrases that we hear coming out of radios and TVs and Twitter feeds all of the time. We use personal stuff to talk about bigger social issues that can feel so foreign and distant.’

Social media can be a blessing and a curse to Dan. ‘If you’re me, you don’t see the compliments. It’s this masochistic thing of waiting for the horrible comment and then when it comes, obviously you feel like s**t. We have a line in one of our songs about never reading the comments, ever. I’d love to take my own advice,’ he laughs. ‘Social media can be incredible. The people you speak to, the stories you hear from fans and strangers. It can be hilarious and profound and life-affirming, as well as being awful. I guess it’s just a heightened version of life.’

So what’s next for the band after the festivals and touring? ‘I never stop writing. Having made three albums that I’ve written and co-produced, I love our process, but now it’s about chilling out and collaborating a bit. I want us at the very least to be interesting. Who knows what’s next? I have a bunch of different ideas. I’m just trying to have fun.’ So far, so good.