AUSTRALIA’S prime minister was accused by angry residents of ‘leaving us to burn’ as he cut short a visit to a fire-ravaged settlement.

Scott Morrison was barracked on a walkabout through Cobargo, New South Wales, as a week-long state of emergency was declared in the state and the national death toll from the bushfires sweeping the country reached 18. The premier has been accused of a slow response after taking a Christmas break in Hawaii as wildfires destroyed an area one third the size of England. 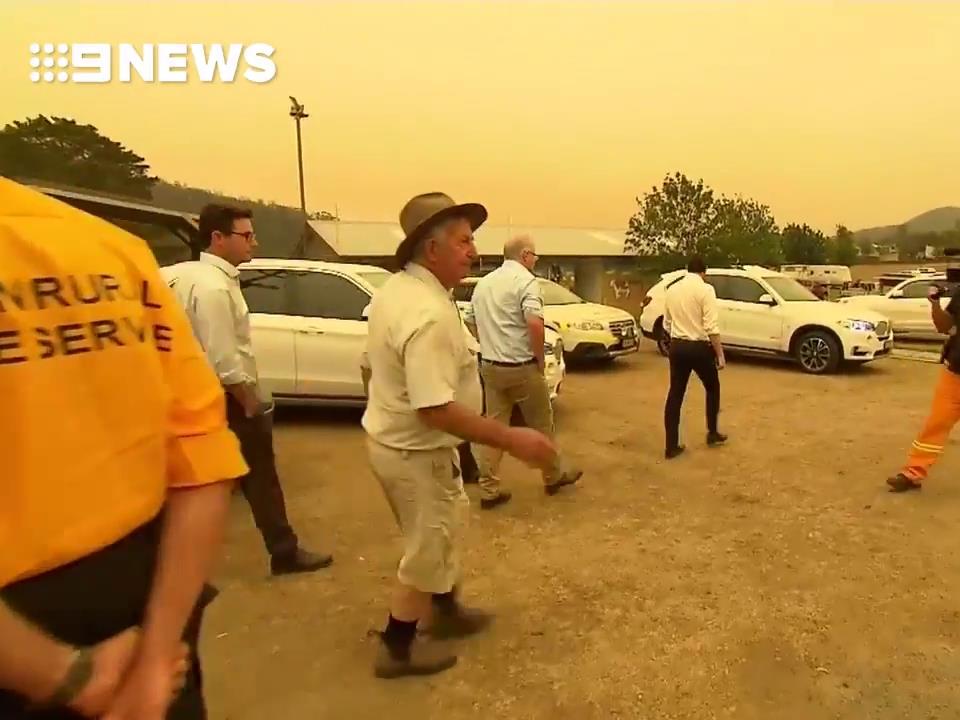 He was told to ‘p*** off’ back to his official residence at Kirribilli House in Sydney after grabbing hold of a woman who refused to shake hands.

‘You’re an idiot, mate,’ said another local in the village where father and son Robert and Patrick Salway died trying to save their home on Monday.

‘You won’t be getting any votes down here buddy,’ a third said.

Roads have become gridlocked in NSW after tourists and residents were ordered to leave a 155-mile zone along the south coast ahead of a return to intensely hot weather and high winds this weekend.

The Australian navy began evacuating an estimated 4,000 people from Mallacoota in East Gippsland, Victoria, after every road was cut off by fire and residents took refuge on the beach.

Campers at Conjola Park, NSW, drove their cars into a shallow lake to escape fires raging on the shore and traffic ground to a halt on the only road out of the coastal town of Batemans Bay. More than 1,200 homes have been destroyed across the country, with temperatures nudging 50C in some places. University of Sydney ecologists estimate around 480million animals have died, including 8,000 koalas.

Petrol shortages and internet outages have slowed evacuation attempts, with around 30,000 people without power in NSW. ‘There is every potential that the conditions on Saturday will be as bad or worse,’ said NSW Fire Service Dep Comm Rob Rogers.

Mr Morrison — also criticised for not taking enough action on climate change — warned the crisis was likely to last for months. ‘It will continue to go on until we can get some decent rain that can deal with some of the fires that have been burning for many, many months,’ he said yesterday.

‘My simple request is to be patient, to have confidence in the state agencies.’

Meanwhile, people in New Zealand have also faced breathing difficulties after smoke drifted around 1,400 miles across the Tasman Sea.