BORIS JOHNSON has signed off the £106billion HS2 rail project — despite admitting costs have ‘exploded’ from the original budget of £32.7billion.

The prime minister vowed yesterday that trains would run on the London to Birmingham stretch of the high-speed route by the ‘end of the decade’.

He said an extension to Crewe would also go ahead and he was ‘committed’ to the rest of the Y-shaped line linking Leeds and Manchester. However, he said a review would be held before work began on the ‘2B’ sections to the two northern cities, to ‘ensure the taxpayer gets maximum value as we proceed’.

A dedicated minister for HS2 will be appointed — possibly in tomorrow’s cabinet reshuffle. And building of the first stretch will begin in April, with much preparatory work already done.

HS2 trains are expected to carry 300,000 passengers a day at up to 225mph. That will cut journeys from London to Birmingham to 45 minutes from 82, and shave an hour off trips between the capital and Manchester.

Critics say the benefits are not worth the cost, environmental damage and destruction of homes involved.

But Mr Johnson told MPs HS2 would be ‘truly transformative for the entire country’. He said: ‘Ambition is what we have lacked for far too long. Two centuries ago, our ancestors could have been content with breeding faster horses — instead, they invented the railways.’

HS2 was first proposed more than a decade ago and was expected to open in 2026 — but bosses now predict the second phase may not run until 2040.

Mr Johnson slammed the company in charge of the budget, after costs of buying up land and shifting existing infrastructure were underestimated.

He added HS2 Ltd had been ‘woeful’ in its dealings with communities where people’s homes and public buildings are to be torn down.

And he said a new team would be put in charge to build the second section.

‘The cost forecasts have exploded but poor management has not detracted from the clinching case for high-speed rail,’ the prime minister added. Later, on a visit to the site of the Birmingham HS2 terminus, he said big projects always face resistance over cost. ‘The Treasury, if they had got their way, would have stopped the M25,’ he added. ‘They would never have allowed the Channel Tunnel to go ahead.’

The National Audit Office has warned it is impossible to accurately estimate the final cost of the scheme. And Tory Andrew Bridgen warned it will be an ‘albatross’ around the prime minister’s neck. ‘HS2 is unloved, unwanted and has been grossly mismanaged,’ said the North West Leicestershire MP.

‘It’s turned into a monster getting very fat on taxpayers’ money, and you can’t keep feeding the monster.’

Jeremy Corbyn said Labour backed HS2 — which had only been put in doubt as the government was ‘incapable of keeping a lid on costs’. He mocked the PM’s passion for grand schemes, such as a bridge to Northern Ireland, by bringing up projects he has championed in the past. ‘Why not go the whole hog and make it a garden bridge connected to an airport in the sea,’ he asked.

Y, where and how: The proposed route 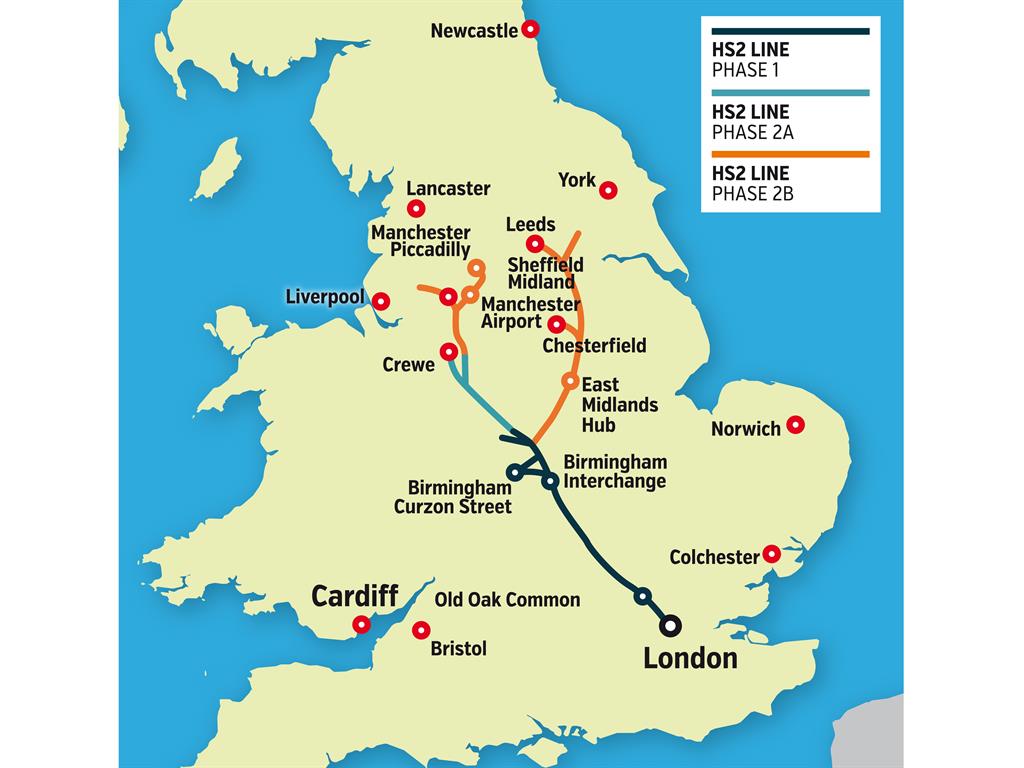