A SECOND wave of Covid-19 is under way on the continent and everyone who goes abroad on holiday runs the risk of having to self-isolate when they get back, Boris Johnson has warned.

The prime minister defended the new rule — announced with just five hours’ notice at the weekend — that holidaymakers returning from Spain must undergo 14 days of quarantine.

And he said similar action could affect passengers flying home from other tourist hotspots.

‘What we have to do is take swift and decisive action where we think that the risks are starting to bubble up again,’ Mr Johnson said.

‘Let’s be absolutely clear about what’s happening in Europe, amongst some of our European friends — I’m afraid you are starting to see in some places the signs of a second wave of the pandemic.’

‘That’s why we have taken the action that we have and we will continue, throughout the summer, to take such action where it is necessary.’

Families arrived at airports yesterday to find their flights to Ibiza and Majorca had been cancelled by airlines after advice against travel to Spain’s mainland was extended to include all its islands.

Tui has suspended trips to the islands until July 31 at the earliest.

Chief medical officer Prof Chris Whitty is said to have pushed for an end to Spain’s exemption from the quarantine rule, which already applied to travellers from many countries including Portugal.

The government adviser reportedly grew concerned after ten Britons who had flown back from Spain tested positive. 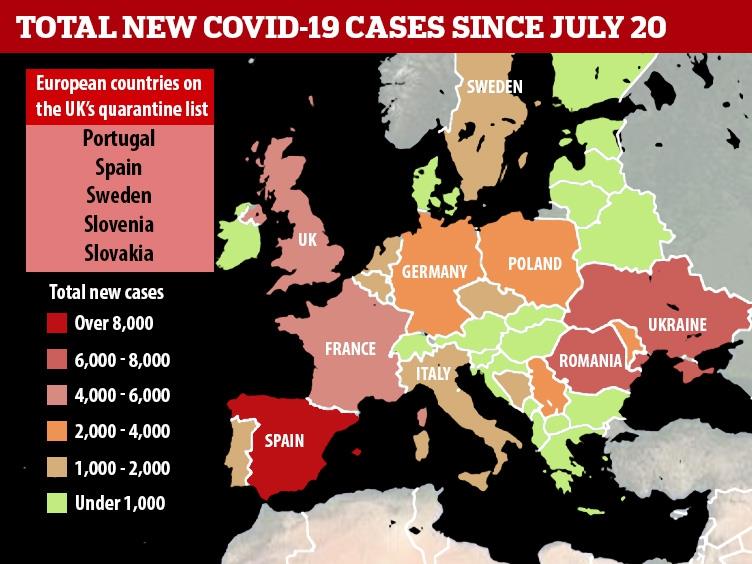 But Spain’s prime minister Pedro Sanchez has said the decision was an ‘error’ because the rise in new cases has been driven by localised outbreaks.

Masks are to be made mandatory in all public spaces in Madrid — severely hit during the first wave — as part of an action plan to contain the virus.

Bars must shut by 1am, gatherings on restaurant terraces will be capped at ten people and extra checks will be carried out at the main airport.

Holiday hotspot Greece, which won praise for its success in controlling the spread of the virus earlier in the year, has also beefed up measures after a rise in cases.

From today, masks must be worn in shops, offices, banks and on public transport.

‘The situation must not cause panic but neither complacency.’

Mr Johnson said people needed to be cautious about going abroad but said: ‘These are decisions for families, for individuals, about where they want to go.’

John Phillips, the GMB union’s acting general secretary, said jobs in the travel industry were on the line and criticised the government for ‘chopping and changing’ its advice and instructions to holidaymakers.

‘British travellers have been left up the creek without a paddle by muddled ministers,’ he said.

‘For them to now suggest workers left in limbo can rely on employers’ goodwill alone to keep their jobs will be scant reassurance.’

■ NEW measures to stop the spread of Covid-19 have been introduced in Oldham after a spike in cases. The town’s 235,000 residents are being asked not to have social visitors to their home and care homes will not relax restrictions on visiting. People who are shielding should continue to do so. The new guidance, announced yesterday and to last two weeks, aims to avoid a local lockdown as seen in Leicester.