NEVER-before-seen engraved blocks used to print the legendarily rare first edition of Alice In Wonderland have been found stashed in a barn.

Window cleaner Paul Searle, 56, bought a job lot of ‘junk’ for £50 at a clearance sale, hoping to find interesting and quirky glass bottles for his collection.

He found four heavy metal plates in a tin hidden among the dusty bottles, etched with detailed drawings of a little man in a top hat at a tea party, and a girl in a puffy dress.

An online search on his phone in the pub revealed two were copper-plated lead printing blocks used to create the 1865 first editions of Alice’s Adventures In Wonderland.

Only about 20 copies of the first edition survive, making it one of the rarest and most valuable books in English literature.

He also had another two blocks used to print the first editions of sequel Through The Looking-Glass, And What Alice Found There, in 1871.

Dad-of-one Paul, from Norwich, Norfolk, said: ‘These are something no one else in the world has. It’s the find of a lifetime.

‘When I opened the box they were in I had no idea what they were at all. I thought they were just scrap at first.

‘The woman [who sold them to me] could not say how long she had them for or where they came from, she’s just had them lying around in the barn for years.

‘I took them home and when I looked at them I could see the incredible detail of the drawings.

‘But I was actually in a pub and just searched for copper-plate illustrations on my phone and a link popped up for an auction in America for the same type as mine.

‘The penny just dropped. I realised this is something money can’t buy and I have something that doesn’t exist anywhere else.’ 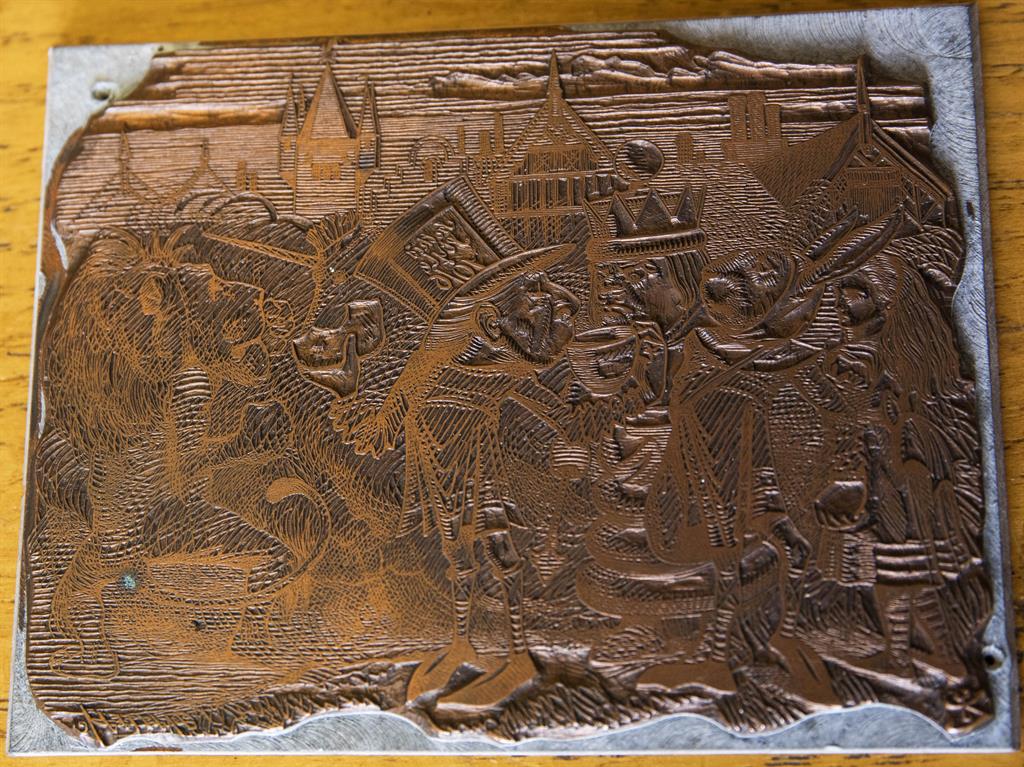 Paul came across the plates in a barn in Bungay, Suffolk, during a routine bottle collection job in September.

He collects bottles for fun and enjoys clearing out garages, sheds and barns full of old junk.

He said: ‘Quite often rare bottles end up in people’s gardens for whatever reason.

‘The funny thing is that the bottles in the barn this time were worthless, I just said I’d give her £50 to take the whole lot away for her.’

He took the printing plates to an auction house who wrongly guessed they could be templates of drawings for The Lion, The Witch And The Wardrobe.

This set Paul off on the right track and that was when he came across the link to a 2018 New York auction of 49 almost identical copper plates.

After realising the magnitude of his find, Paul phoned a bookshop in Oxford, where the author had studied at university.

He said he wanted to ‘preserve them in history’ and see them returned to their ‘rightful home’.

The unnamed bookshop helped Paul get his finds verified as genuine by the British Museum.

The first edition of Alice’s Adventures In Wonderland was printed by Clarendon Press for Macmillan in 1865.

But when Tenniel saw the first copies he was not pleased with the reproduction of his illustrations and persuaded Carroll to recall all those that had been printed.