BORIS JOHNSON has been condemned for spending nearly £1million on a patriotic paint job for his official plane — and now his car will need to go into the garage as well.

The prime minister, who has given the go-ahead for the jet to be resprayed red, white and blue at the taxpayer’s expense, was involved in a crash as he left parliament yesterday.

The driver of the Jaguar he was in braked sharply to avoid a protester and was hit from behind by a Range Rover support vehicle, which left a huge dent.

No one was injured in the shunt but the plane row was causing severe turbulence, with Mr Johnson accused of ‘colossal’ extravagance at a time of national crisis.

Just a day earlier — bowing to pressure from football star Marcus Rashford — he had reversed a decision to deny needy children £15-a-week vouchers for food over the summer holidays.

And as the refit emerged, Labour’s Louise Haigh said: ‘When families across the country are worried about their jobs, health and the education of their children, they will rightly question the government’s priorities. They are spending almost £1million redecorating a plane which in all likelihood has been grounded for months because of the coronavirus.’

Acting Lib Dem leader Sir Ed Davey said: ‘The drug dexamethasone, that can potentially save the lives of people with coronavirus, costs £5 per patient. 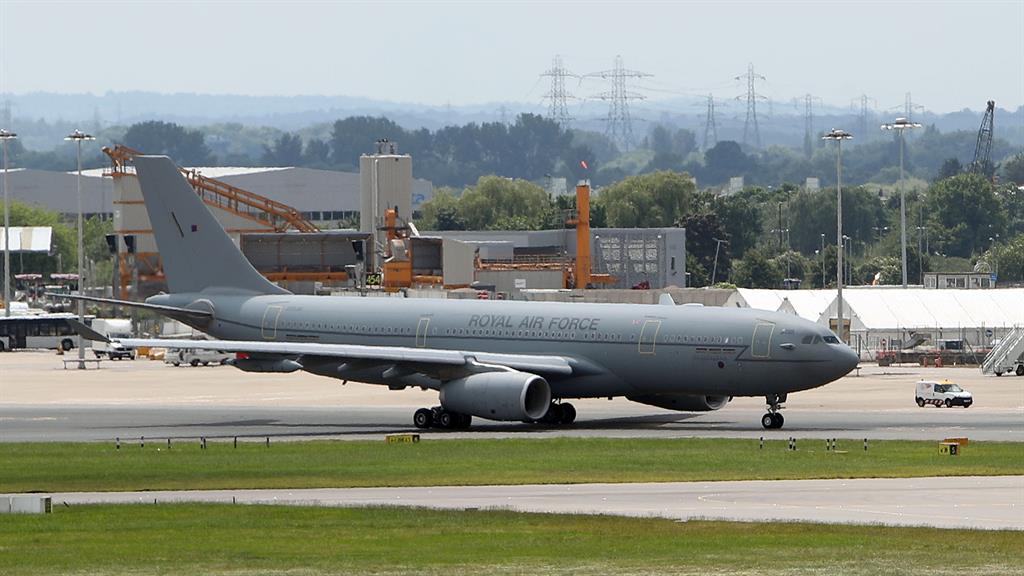 ‘Boris Johnson could have bought 180,000 doses of that, but instead he’s painting a flag on a plane.’

The grey RAF Voyager (pictured above) is used by ministers and royals.

No.10 said it was being repainted in Union Jack colours to ‘better represent the UK around the world with national branding similar to other leaders’ planes’. The jet is also used by the RAF for air-to-air refuelling. And the price of about £900,000 ‘incorporates the cost of creating a design that will promote the UK around the world without compromising the plane’s vital military role’. Rather than a head-to-toe ‘Austin Powers’ design, only part of the plane will be sprayed with the flag, an RAF source confided.

The PM’s spokesman said: ‘At every stage we have worked to ensure value for money and all of the work has been undertaken in the UK, directly benefitting British suppliers.’

The plane began to be used by the government in 2016 after being given a £10million refit to make it suitable for the new purpose.

Mr Johnson has long wanted to renovate the aircraft, asking two years ago, ‘why does it have to be grey?’ and outlining his dream of a ‘Brexit plane’.

The man who ran towards the prime ministerial car outside parliament was protesting about Turkish action against Kurdish rebels. He was pinned down and detained by police.